It was an amusing and awkward moment over the weekend when defenseman Jacob Trouba admitted that Braden Schneider could eventually replace him.

Trouba was asked about the similarities between he and Schneider, whom are both physical right handed defensemen, and if he could help him develop.

“Yeah! Until he takes my job and then we’ve got issues,” Trouba laughed. “There’s definitely a little similarity. Just the attitude he brings to the game. He’s young and has a bright future.”

Braden Schneider has been impressive

Schneider, 20, played in his second NHL game in Philadelphia on Saturday, So far through two contest, he has looked solid with one goal on four shots, +1 rating, six hits, and two blocks. All while averaging a solid 13:50.

Let’s not get ahead of ourselves, as expectations should remain tempered.

Even though Schneider’s first two NHL games were impressive, he could be back in Hartford next week. That’s just the nature of what’s been going on with the Rangers thanks to COVID and the need to get closer looks at all their prospects.

However, the 6-2, 202 lbs defenseman is a physical presence on the blue-line that likes to hit hard and often. That’s why New York moved up to select him 19th overall by exchanging their first round pick (22nd overall) and a third round selection with Calgary in the first round of the 2020 NHL Draft.

“I’m very happy with how I played. I wanted to show that I can play physical and perform at this level,” Schneider said after his debut. “There’s was time I was loose or hesitant to close gaps on guys but overall I’m happy with the way I adjusted.”

Schneider was very modest in his assessment, but Kris Knoblauch praised his ability to step up on guys, close gaps, and make a strong first pass in San Jose. That carried over in Philadelphia and he will now face a much harder test when the Maple Leafs come into the Garden Wednesday.

Let’s get back to Trouba’s comments because he’s not wrong.

In today’s salary cap world having an influx of talented cost-controlled players is imperative to sustained success. That goes double in the flat cap era where the ceiling is not expected to seriously increase until 2024 due to financial losses related to COVID-19.

When the Rangers drafted the young Schneider, they did so as someone who could one day replace Trouba on the right side top four. You can also say the same for forwards Will Cuylle and Brennan Othmann as a potential replacement for Chris Kreider.

Don’t panic, Kreider’s spot belongs to Alexis Lafreniére but someone needs to be effective on the third line when Laffy moves up.

The Rangers are going to start feeling a cap crunch very starting next season. Both Adam Fox ($9.5M) and Mika Zibanejad ($8.5M) will have their extensions kick in. On top of that, Kaapo Kakko will be an RFA as his ELC expires. GM Chris Drury also has to see if he can retain his second line center Ryan Strome at a reasonable cost.

Yes, that’s a lot of accounting to do. It only gets harder in the summer of 2023 when Filip Chytil’s deal expires. When you couple that with Alexis Lafreniére and K’Andre Miller coming off their ELC’s it will have Drury in a salary cap pretzel.

There is some potential relief starting in the 2024-25 season. That’s when both Trouba ($8M) and Kreider’s ($6.5M) full No-Move Clauses become modified with a trade list.

It’s no coincidence that’s exactly when the ELC’s for Schneider, Cuylle, and Othmann expire. 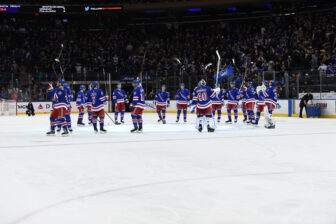