Chris Drury made naming a captain for the Rangers a priority; who should it be?

The Rangers have not had a captain since Ryan McDonagh who was traded at the 2018 trade deadline. The Blueshirts have gone through their rebuild with a group of alternate captains. But now that the rebuild is essentially over and Chris Drury is rounding out the roster, it’s time to name a captain.

The debate, as always, is over just who is right for the job.

The Rangers must make naming a captain a priority

“We can keep moving this thing forward, a big piece of that for me would be getting a captain. For me it’s a priority,” Drury said back in June. “At the end of the day, it has to be the right person. I’m not interested in giving it to someone to just say we have a captain. I think we have a lot of leaders in our room and leaders that have taken big steps, including the second half of last season.”

The new President and GM has made it clear that the goal for the Rangers this season is to make the playoffs. The organization needs to take steps to get there. Drury has already began the process by bringing in players like Barclay Goodrow, Sammy Blais, and Ryan Reaves who immediately make the Rangers harder to play against.

Those type of teams thrive in the post season. Every team in the playoffs last season had a captain. It’s hard to imagine a playoff team without a captain. So the organization has a decision to make.

Now that Drury has remodeled the bottom six, the priority must be choosing a captain. The narrative of wanting to wait a few years in order to name Alexis Lafreniere captain just doesn’t make sense. The timing isn’t right. Same can be said of Adam Fox even coming off a Norris Trophy season.

The three real options are Chris Kreider, Mika Zibanejad, and Jacob Trouba. But which is most deserving?

While it’s not a bad thing, Mika Zibanejad does tend to lead heavily be example. Aside from his skill and talent that the younger players get to be around, there’s his work ethic. The team and hockey world as a whole watched him recover last season from a serious slump. He later revealed that COVID did play a role in his struggles, but his ability to overcome them undoubtedly sent a message to the younger players.

Additionally, his exceptional all around play makes him one of the top centers in the league. He is also the second senior most Ranger behind Chris Kreider. But these factors may not be enough to claim him the captaincy.

Zibanejad is a more consistent player than Kreider or Jacob Trouba, but he is not as vocal. An ideal leader leads both vocally and by example. All three of these veteran players mentor the younger ones, but this seems to apply more so to Kreider and Trouba. 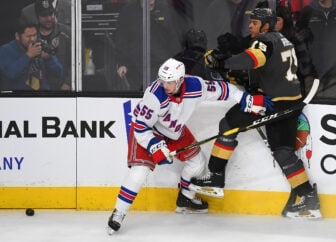 Trouba took a step in the right direction

This past season, Trouba’s leadership qualities surfaced. In his second year with the Rangers, he seemed more comfortable and confident. While his play was still not quite as consistent as desired, he stepped up in other ways. Namely, there was the situation where then Coach David Quinn elected not to go into the locker room between periods and let Trouba speak to the team instead.

As fans, we don’t get to see everything that happens behind the scenes, but this anecdote is a good indication of his character. Trouba also played with K’Andre Miller most of the season and definitely seemed to take on a mentor role. If he can branch out and be consistently vocal, Trouba would make a proper captain.

For years, Chris Kreider has been known to help young Rangers train and adjust to the NHL. He’s been described as a “beast in the gym.” It sounds like he could run his own camp if he wanted to. Like Zibanejad and Trouba, Kreider has the team’s respect. But he seems to forge relationships with individuals from the start. It’s helpful for a leader to know their people well individually, not just collectively. This is not to say that Zibanejad and Trouba don’t, just that Kreider obviously goes out of his way to make this happen.

Kreider’s work ethic both on and off the ice is admirable. He knows his role and when he’s on his game, he can be a very effective forward. The biggest concern is his tendency to disappear for stretches of games. Last season, he experienced this situation, but that’s really just the type of player that is. While it’s not ideal, Kreider also has the ability to step up when it matters most. When Artemi Panarin was out on a leave of absence last season, it was Kreider that shouldered the responsibility and compensated. Most importantly, he did it by being the player that he is rather than forcing himself to be someone else.

The 30 year-old also got a ringing endorsement from one of his old teammates. “He does everything right,” Brian Boyle said to NHL.com. “He’s been through everything on that team and now he’s the old guard, even though he’s not old. He’s still got wheels, he’s a high-character person, a smart individual and knows what it takes to win. I’ve been friends with him for a long time, so I’d love to see that.”

Drury has spoken about every player knowing their role. Kreider does. And soon that could include being the captain. He leads through a combination of vocal and demonstrative methods. Zibanejad and Trouba are legitimate candidates but neither does all of the things Kreider does. He could lead this team to the playoffs. The time is right to name a captain, and it should be Kreider.