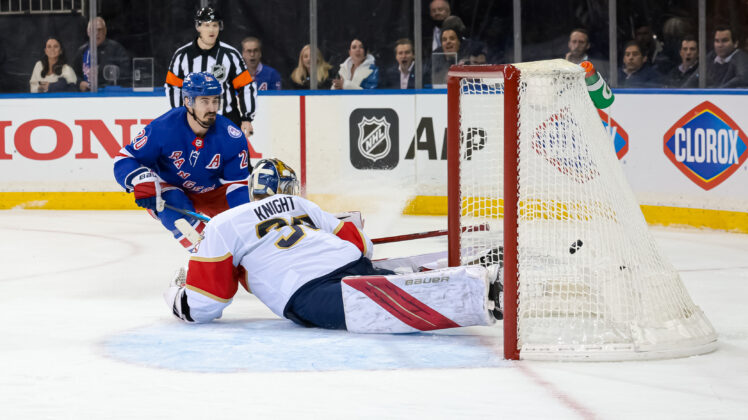 The New York Rangers played host to the high-flying offense of the Florida Panthers at Madison Square Garden. It was a huge game for the Blueshirts, who were looking for a win before a two week break.

Thanks to All-Star Chris Kreider’s monster performance, the Rangers answered some questions by beating the best team in the NHL.

Ryan Reaves took the ceremonial draw against Anthony Duclair to open up Black History Month. Head coach Gerard Gallant gave Reaves the starting honors on the right wing with Mika Zibanejad and Chris Kreider and it paid off.

Just 35 seconds into the game, a turnover caused an odd-man rush. Zibanejad tried to center it for Reaves but it was deflected in by the Panthers’ defender past Spencer Knight for the early lead.

Florida took it to the Rangers from there and even had an Owen Tippet goal waived off after a Gallant challenge deemed it offside.

It really didn’t matter because less than 90 seconds later Anthony Duclair tied the game off a nice set up by Aleksander Barkov and Jonathan Huberdeau.

On both goals, the Rangers did not handle the Panthers rush. It was something they would address in the next two periods with authority.

The first ended at 1-1, but Florida fired 15 shots at Shesterkin to the Rangers 6. New York knew they needed to better.

The middle frame started with an early holding penalty by K’Andre Miller on Sam Reinhart at 1:13. It took Reinhart 65 seconds to make Miller pay as he scored the power play goal.

Genuine concern set in the Garden crowd, especially when you take into account the heavy shot advantage by the Panthers from the previous period.

However, these Rangers don’t give up and they don’t get down on themselves. Just 69 seconds later, Alexis Lafrenière converted Chris Kreider’s strong forecheck with a backhander by Knight to even it up.

New York kept up the pace and eventually took the lead. With Carter Verhaeghe in the box for hooking Ryan Strome, the Blueshirts highly-touted power play went to work.

It took Kreider 39 seconds to put home a beautiful saucer feed from Strome for his 32nd goal and 16th on the man advantage. Artemi Panarin picked up the secondary assist for his 50th point of the season.

Florida being the excellent team they are responded with a push of their own.

Just a few minutes later, Trouba saved a goal with a last second stick lift on Reinhart to keep it 3-2 heading into the third period.

Chris Kreider on the PP again

The Rangers and Panthers played a spirited final frame that even saw Ryan Strome drop the gloves with Mason Marchment. Strome was blindsided by Marchment in the second period and he wanted retribution. It was a great tilt with Strome landing a few haymakers and the all important take down.

Both teams went back and forth but New York would seal the deal thanks to… you guessed it – a Chris Kreider power play goal.

After extending his NHL goal scoring lead to 33 and 17th on the man-advantage, Kreider just looked at Zibanejad with a smile. That’s because his center and close friend threaded a pass through a defender’s legs right to the tape of his stick.

“Just look at the guys on the team passing me the puck. I’m just trying to get to the areas and they keep finding me,” Kreider said of Strome and Zibanejad. “I’m just the backboard for those guys on most nights.”

Panarin sealed the deal with an empty net goal to give him three points on the night (1G – 2A).

When the final horn sounded, Kreider retrieved the puck for Gerard Gallant, who picked up his career 300th win. 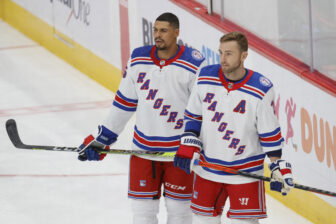