Madison Square Garden provided the setting for the New York Rangers to get things back on track against the Arizona Coyotes. They would need to do so with very little sleep after travel issues coming back from Carolina.

Before the puck was dropped some more adversity would need to be overcome. The team announced Kaapo Kakko was out with an upper-body injury and considered day-to-day.

Of course, the Rangers still had Chris Kreider and he played the role of hero for a jet-lagged team.

It was another slow start for the Blueshirts, which is becoming a troublesome trend. The Coyotes hit the ice buzzing and were rewarded just 2:29 into the game. Liam O’Brien cashed in a rebound by Igor Shesterkin for the early 1-0 lead.

The Rangers responded just 46 seconds with a Jacob Trouba shot that seemed to confuse Yotes’ rookie netminder Karel Vejmelk. Mika Zibanejad and Chris Kreider would pick up the assists. For Zibanejad, he extended his point scoring streak to 8 games.

New York couldn’t stay comfortable for long. Once again, it was the Braden Schneider and Patrik Nemeth that looked lost when Andrew Ladd regained the lead for Arizona at the 6:56 mark.

The Rangers had a few chances to tie the game, but after 20 minutes were embarrassingly outshot 16-4.

“I think we underestimated them a little bit,” Dryden Hunt explained. “They’re below us in the standings. For us to give that kind of effort in the first period is unacceptable.”

Kreider to the rescue

The second period began with Filip Chytil out for the game with a lower-body injury. New York was still skating through mud when Clayton Keller made it 3-1. It was a fortuitous bounce off the linesman’s skate that caused an odd-man rush for the goal.

Things were looking bleak and were seeming about to get worse when Ryan Strome was called for slashing.

While the Rangers were killing a penalty, someone must’ve got back from JFK airport with their legs. All of a sudden the team was buzzing and were rewarded with a Chris Kreider shorthanded goal, his second of the season and career.

“Chris has been scoring big goals all year. Add that to the list,” Trouba said of the shorthanded goal. “He’s always in the right spot it seems. He gets to the front of the net — he’s a big presence there.”

Julien Gauthier, who was to be a healthy scratch again until Kakko was ruled out, tied the game by crashing the net. The big man parked himself in front and put home a loose puck off a Greg McKegg shot.

Soon after, Johan Larsson and Adam Fox got tangled up in the Rangers zone. Larsson then punched Fox in the back of the head and was called for roughing. That put the Blueshirts on the man-advantage and it didn’t take long for them to take the lead.

Artemi Panarin would take a pass from Fox and work it to the top of the right circle before snapping it by Vejmelk.

Finally, with 1:18 left on the clock it was Kreider again to make it 5-3. The goal was unassisted and gave him the 28 goals on the year.

“We started skating more. A little more compete, it went a long way for us,” Trouba said.

The Rangers kept it rolling to start the third period. This time it was Trouba blasting his second goal of the game to give the team five consecutive goals. It chased Vejmelk from the game, who gave up 6 goals on 20 shots.

Scott Wedgewood would be the next victim for the scoring assault by Kreider. On the PP, he would net the hat trick by being in his wheelhouse in front of the net.

“I am really proud of this group and the way we came together,” Kreider said. “It is such a good group in the room. These guys really want to win hockey games.”

The Rangers overcame a bad start. They were certainly impacted by getting in late from travel, and also fortunate to be facing the league’s worst team. However, when you look at the standings it doesn’t ask how or why. It simply asks, ‘did you you win?’

And the Rangers can respond back with a resounding YES!

New York is back in first place as the Hurricanes fell to the Devils 7-4. 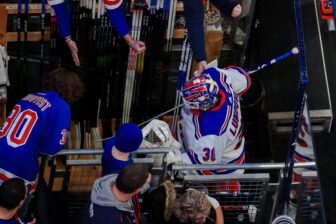