What a season for New York Rangers forward Chris Kreider as he was named the winner of the Steven McDonald Extra Effort Award.

Every year since the 1987-88 season, the New York Rangers have honored New York City Police Detective Steven McDonald, who was shot and injured in the line of duty on July 12, 1986 and passed away on January 10, 2017.

The Steven McDonald Extra Effort Award is presented to the Rangers player as selected by the fans that “goes above and beyond the call of duty.”

Kreider, 30, was visibly emotional accepting the honor. This is the first time he’s won the award in his 10 seasons with the team.

“There’s a lot of guys deserving of that award other than myself,” Kreider said during the intermission. “It’s probably the greatest honor I’ve experienced as a hockey player knowing what that award means. It was hard to stay composed and I couldn’t be more grateful. Steven’s name was incredible… His family is our family which was made abundantly clear when I got here.”

Adam Fox won it last year, and his good friend Mika Zibanejad won it back-to-back before that. Adam Graves has won the honor the most with five.

For more on the life of Steven McDonald read here.

Thus far, Kreider has skated in 79 games, recording 51 goals and 24 assists for 75 points. Kreider is the fourth player in Rangers history to score 50 goals in a single season, joining Jaromir Jagr (2005-06), Adam Graves (1993-94) and Vic Hadfield (1971-72). On April 5 at New Jersey, Kreider set a franchise record with his 25th power play goal of the season. His 11 game-winning goals are also a franchise record. Kreider is the 12th player in NHL history to record 51+ goals and 26+ power play goals in a season and first since llya Kovalchuk notched the feat in 2005-06. He is the only player in NHL history to record 50+ goals, 25+ power play goals, three+ shorthanded goals and 10+ game winning goals in the same season. When Kreider scored his 50th goal on April 12 against Carolina, he became the eighth player in NHL history to hit the 50-goal milestone for the first time in his 10th season or later and first since Dave Andreychuk (11 seasons) in 1992-93. Kreider was the fourth skater in league history to score 50 goals for the first time at 30 years or older (beginning of season), joining Joe Mullen, Vic Hadfield and Johnny Bucyk.

Kreider represented the Rangers at the 2022 NHL All-Star Game in Las Vegas and helped the Metropolitan Division win the event. The Blueshirts alternate captain has accomplished several milestones during the 2021-22 season. On March 15 against Anaheim, he recorded his 400th career point. On January 13 against San Jose, he scored his 200th career goal. Against Colorado on December 12, he played in his 600th career game. In his career-year, Kreider, a 19th overall pick by the Rangers in the 2009 NHL Entry Draft, has also climbed franchise ranks. Kreider’s 228 goals are the tied for the 10th most in franchise history, his 84 power play goals are the fifth most in team history and 34 game-winning goals rank ninth all-time for a Blueshirt.

On Monday, Kreider was also nominated for the Bill Masterton Trophy which is awarded to the NHL player that best exemplifies the qualities of perseverance, sportsmanship, and dedication.

In 2017, he overcame a life-threatening blood clot to become one of the team’s leaders both on and off the ice.

“I had trouble choking back tears when the anthem was playing,” Kreider said to ESPN after returning from surgery. “When you’re in the NHL, you’re stuck in this maze where everyone is hyper competitive. You live and die with wins and losses. Then you get out of the maze and it changed my perspective for the better. Your career goes by so fast. This was my first opportunity to step back and see that. If you can’t be grateful playing in the NHL, shame on you.” 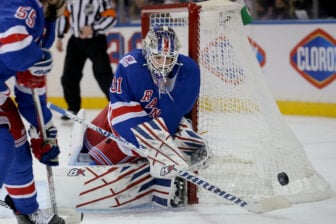