Filip Chytil was considered gamble and a reach when the Rangers selected him in the late first round of the 2017 draft. They took the same chance with Lias Andersson at 7th overall and got burned that same year.

After last night’s performance, in a gutsy 5-4 OT win against the Islanders, that gamble may be starting to payoff. While some may disregard it, Chytil rightfully should not.

“For me, it matters,” he said after picking up the hat trick. “It’s still goals. We won the game. Everyone can say it’s preseason, but for our confidence, it’s huge. We’re happy that we finished the preseason like this.”

The kid is big at 6’2″ and 206 pounds, but in his young career he’s been rightfully criticized for playing a soft game. On too many occasions he didn’t stick up for himself when confronted in his young career. That may not be a big deal during the regular season, but it stands out like a wart during the playoffs.

Although last night, Chytil emerged a more confident looking player as he was aggressive with and without the puck. He used all his tools and put the a shorthanded Rangers team on his back.

Facing a fully stacked Islanders roster, the Blueshirts were sans Artemi Panarin, Mika Zibanejad, and Chris Kreider. Late in the second period, they lost Ryan Strome to a hand injury which thrusted Chytil to the top line.

The 22 year-old, who is entering his 5th year with the team (4th full season), didn’t wilt. Instead, he excelled by first restoring the team’s 1 goal lead, not once but twice in the third period. And then winning it in OT.

Last year, he showed real promise despite an injury to his wrist and contracting COVID. In 42 games, he scored 22 points, a .14 points per game improvement over his previous season. A more aggressive and confident Chytil can do even better in 2021-22. His strong performance against the Isles is an indication of what he capable of and it caught the eye of his new head coach.

“He’s got a lot of confidence going for sure, he’s played really good the last few games,” Gerard Gallant said. “He’s a guy that wants more ice time. He wants to be play center, we want him there. He played great tonight, he buried his chances.”

The Rangers hope that continues against the Capitals when the season opens on Wednesday. 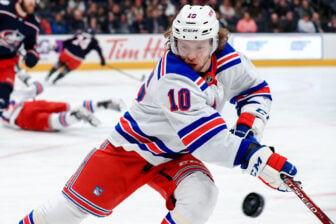 The Rangers luckily escaped a serious injury to Strome it seems, but the Maple Leafs were not so lucky. Read more.