The New York Rangers are three days into training camp and one thing seems apparent, the extra forward battle is likely to be between Dryden Hunt and Jimmy Vesey.

Despite the fact that the New York Rangers invited 66 players to training camp, there is very little room for a new rookie to break into this potent lineup for the 2022-23 campaign.

The three lines that head coach Gerard Gallant began with look good on paper and have been strong thus far at camp.

On Friday, it seemed more apparent that Gallant would be using a fourth line consisting of:

The Rangers head coach, now in his second season behind the Blueshirts bench, acknowledged that Reaves may not play every night, but he remains confident in the veteran forward.

Unless a major shift in camp occurs, these four lines will most likely be the opening night lineup. That leaves just one more decision to be made for the offense.

Who will be the extra forward?

In his first year with the Blueshirts, Hunt appeared in 76 games for the Rangers last season scoring six goals and 17 points. He is a versatile player who had opportunities throughout the season to play on different lines but is known as a bottom-six forward for the most part.

During the Rangers great playoff run to the Eastern Conference Finals, the 26 year-old only played in three games.

Vesey signed a PTO over the summer with the club and looks to make the team for the second time in his career.

The 29-year-old is entering his seventh season in the NHL. His first three seasons were with the Rangers, but he also played for Buffalo, Toronto, Vancouver, and last season with the New Jersey Devils.

There are a few differences between the two players, but Vesey has the advantage in two categories starting with offense. He scored 72 goals along with 135 points in 422 career NHL games. Hunt, in five NHL seasons, has found the net just 12 times in 165 NHL games (40 points total).

Offensive numbers aside, Vesey has one key advantage over Hunt that Gallant needs to consider: experience on the penalty kill.

The Rangers lost Andrew Copp, Tyler Motte, Greg McKegg, Kevin Rooney, and Ryan Strome in the offseason. All took their turns on the PK, so the Rangers need to address that part of their special teams game. Gallant needs to find more players to put on the PK, which gives Vesey an edge.

Vesey has two shorthanded goals for the Devils last season. He falls into the category of Rangers who pursue the puck hard and can be relied on in almost any situation throughout a game.

It is early in camp, with the team’s first preseason game slated for Monday night, but the coaching staff knows what they are looking for.

Anticipate Jimmy Vesey signing a contract prior to that time. How many games he gets into will depend on his play and the play of any of the three players on the fourth line on any given game night. 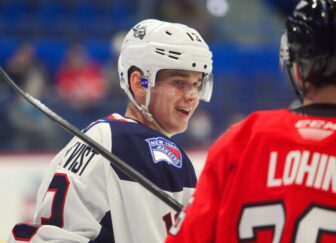