As was pointed out multiple times after their Game 6 elimination, the New York Rangers took one too many steps into a long postseason.

The Rangers loss at the hands of the Tampa Bay Lightning came in their 20th playoff contest in 40 days. Simply put, even for a young team like the Blueshirts, it was just too much hockey in a short amount of time.

Vince Mercogliano of USA Today brought up those numbers to Gerard Gallant postgame asking if it was a factor.

“I’m glad you brought that up because that’s what I was thinking– there’s no doubt it showed up,” Gallant responded. “When you go 7 [games twice] there’s not much break and guys don’t get a chance to heal much. It made it tough but we battled hard and did the best we could.”

The Rangers struggled to score in this series past the second period of Game 3. In fact, they scored just one even strength goal in their four straight losses. New York could not muster more than one goal in each of the last three games.

When asked if fatigue was a factor for the lack of offense Gallant responded quickly with a “definitely.”

“They’re a big defensive team. They make it tough on you and box you out really well,” Gallant continued. “Our forwards were trying to battle to get there and it’s fatigue. There’s no doubt in my mind.”

One of the Rangers leaders echoed his coaches sentiments.

“Guys got tired. It’s a lot of hockey in a short amount of time,” Jacob Trouba explained. “It’s hard, physical hockey too. A lot guys with some courageous efforts playing through some injuries and putting it on the line. Guys were feeling it I’d say.”

Ryan Strome, who suffered a lower-body injury in Game 3 leaving that contest did not play in Game 4. He tried gutting it out, but was visibly not a 100% and didn’t play in the third period.

Barclay Goodrow returned early from a believed fracture ankle and played through pain.

Filip Chytil left Game 4 with an upper-body injury and gutted out the rest of the series. While Mika Zibanejad, who took several high sticks to the face is likely playing with an issue impacting his nose.

And these are just what is known or appear obvious.

“The playoffs at times can be a war of attrition, and I think in the end the layoff helped us. It didn’t early, but no layoff hurt them and the long series. These games are 2-1, 3-2, they’re all extremely tight games. They gave us everything they had.’’

The New York Rangers campaign has ended after 82 regular-season games and a playoff run of another 20 matches.

It was an incredible run by a close-knit group that saw many of its kids grow by leaps and bounds.

As will players like Adam Fox, Ryan Lindgren, and Igor Shesterkin. All three have gotten a taste of what the NHL Playoffs are like.

Prior to the game, former Rangers captain and now Lightning assistant Ryan McDonagh said something this team needs to learn.

“Focus on the opportunity at hand,” McDonagh answered to a question about being one win away from the Final.

“We’ve used that mentality in the past,” he continued. “You can’t let these opportunities slide and your tomorrow’s are running out. You’ve got to find a way to close them out.”

If there is one takeaway this team needs to learn it’s find a way to take the opportunity presented and close teams out. It was evident in Game 3, where they held a 2-0 lead midway through the contest with an opportunity to go up 3-0 in the series.

They failed to get the job done and let the champs off the hook costing them the series.

A lesson learned I’m sure. 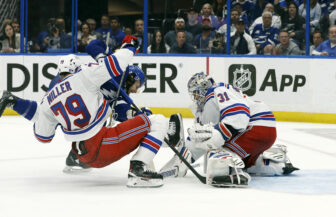