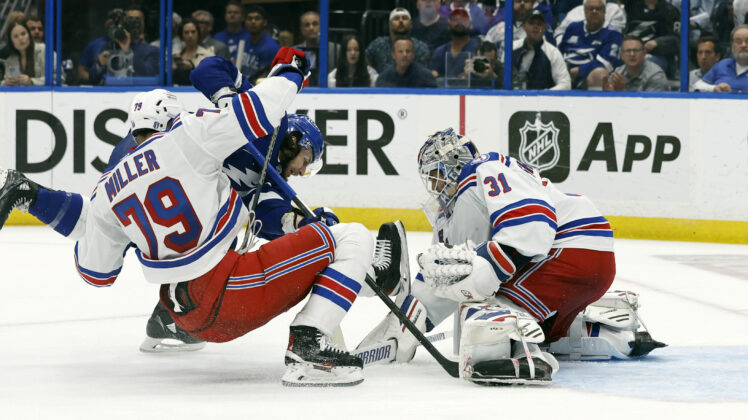 The New York Rangers weren’t supposed to be here. At least not yet.

However, when you get this far the loss is going to sting. This young group having been so resilient in two prior series found themselves up 2-0 against the two-time defending Stanley Cup Champion Tampa Bay Lightning.

In Game 3 they even held a 2-0 lead in the match but a Nikita Kucherov power play goal turned the entire series around. Tampa went on to win four straight and close it out with a 2-1 victory in Game 6 to head to their third straight final.

For the Blueshirts, this was a team that many people weren’t sure could make the playoffs. Instead, they finished second in the Metropolitan Division and made it all the way to the Eastern Conference Final.

The Tampa Bay Lightning came out like a team that wasn’t going to lose tonight.

If not for Igor Shesterkin, this game would’ve been a blowout. For the contest, he stopped 29 of 31 shots but it was the quality chances that made this performance his best of the playoffs.

Breakaway stops on Anthony Cirelli. Multiple 2-on-1 saves. He simply was amazing.

Unfortunately, the only player he couldn’t stop was Steven Stamkos, who recorded both goals.

Stamkos opened the scoring with a wicked shot from the right circle as he used Ryan Lindgren as a partial screen. Shesterkin picked it up a tad late and couldn’t get his blocker on it.

New York struggled all game to get any speed though the neutral zone but a great shift by Alexis Lafrenière led to a power play in the third period.

Frank Vatrano blasted a clean face-off win by Andrew Copp past Andrei Vasilevskiy to tie the game at the 13:07 mark. Finally it looked like the Rangers had life and something to maybe build on.

Then the know-how of the champions struck again just 21 second later.

The Rangers inexplicably were overly aggressive pushing the play up when a neutral zone turnover caught both K’Andre Miller and Jacob Trouba too far up ice. Kucherov found Stamkos coming in all alone and Shesterkin made the initial stop. Tampa’s captain followed through and his leg knocked in a juggled puck for the series clinching goal.

Credit the Rangers for trying hard to tie it with Shesterkin pulled, but the Lightning defense stood strong to end this magical run.