Team USA has announced its coaching staff under Mike Sullivan and former Rangers bench boss David Quinn will be at the 2022 Olympics.

“We’ve got a great coaching staff in place,” said Stan Bowman, general manager of the 2022 U.S. Olympic Men’s Ice Hockey Team. “It’s a group that knows what it takes to be successful, and through their unique and varied backgrounds will help put our team in the best position to win the gold medal.”

The 54 year-old Quinn coached the Rangers to a 96-87-25 over his three seasons in New York. That’s a career points percentage of .522 which is excellent when you consider for three years his roster was always in a state of flux and growing younger by the season.

He was hired from the college ranks to groom the Blueshirts’ kids and he did that well. He never had the roster pieces on the bottom six to play like the Islanders as he so often hinted at. The Rangers brass wanted to see what they had in a number of prospects and let’s face it, Kaapo Kakko was not going to play like Cal Clutterbuck on the third line. The onus was to win and develop kids even if it meant Julien Gauthier and Vitali Kravtsov had to do so on the 4th line. Not easy.

One industry source that understands the coaching game well explained to me that unlike a player making the transition from NCAA to the NHL, a coach almost has no support. The NHL isn’t a developmental league and that probably goes for coaches more than it does for players.

Quinn also has a relationship with Mike Sullivan so this is a perfect opportunity for him to continue his career. 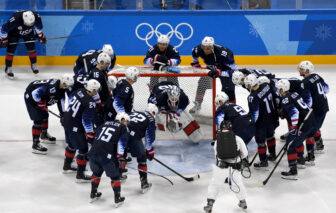 Also Read:
NHL and NHLPA agree to participate in 2022 Olympics

Two centers are back in the rumor mill. Read more here.