The New York Rangers held their first scrimmages on Thursday between Team A and Team B. During the session, Igor Shesterkin was run into not once but twice. Each time coming up a little shaky and plenty frustrated.

Adam Sykora was the culprit the first time, brushing Shesterkin. The 2022 second-rounder immediately made the universal sign of “My bad.” Jarred Tinordi wound up taking out the netminder the next time in defending against a Jonny Brodzinksi drive to the net.

These incidents, although minor, prompted questions to head coach Gerard Gallant regarding contact in camp.

“I told them [not to bump Shesterkin] before we started,” Gallant said via the Rangers YouTube channel. “There’s no fighting out there and there are no big hits out there. We’re out there to see some skill, some talent and play fast.”

The head coach stressed that when the preseason games start they can go harder to try and win a job. He also reiterated to point of these scrimmages is to get into shape for those contests.

“There’s four days of practice and after that they’re playing the real exhibition games,” he said. “These games don’t mean nothing to me. They’re not going to make our team off these next few days, trust me.”

Igor Shesterkin must be protected at all costs

This season, the Rangers will rely a little more heavily on Shesterkin after trading Alexandar Georgiev to the Colorado Avalanche in he summer. His new backup, Jaroslav Halak is 37 and should play somewhere between 20-25 games.

“Competition with any goalkeeper should spur you on, because without it there is no professional growth,” Shesterkin told RBC. “Now our team has signed Jaroslav Halak. I am sure that the competition will also be serious, plus you can learn something from him, as he is a very experienced goalkeeper. And I wish Alexander Georgiev only good luck.”

One thing is clear heading into this 2022-23 campaign, Shesterkin will not lean on last year’s success to push him forward.

“We need to forget everything that happened last season and prepare for the new campaign with a cool head,” he said “I’ve already started training. I’m waiting for the form [from the Rangers trainers] to be sent, then I’ll start going out on the ice.”

Shesterkin also wanted to add that although the team needs to put what happened behind them, he feels the Stanley Cup is within reach.

“Yes, from year to year the goal is the same,” Igor explained. “We got good experience last season. I think we have a chance. The main thing is to believe in it.” 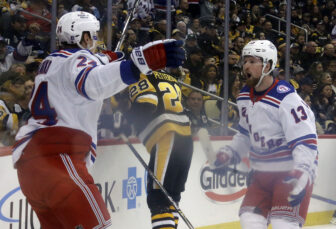