The first day of New York Rangers training camp wrapped up and aside from a brief scare when Igor Shesterkin was bumped a few times during scrimmage, the team’s leaders are singing the same tune.

“Last year was last year,” new captain Jacob Trouba noted. “We’ve talked about it and we’re moving on. It’s a new season and that’s the beauty of this league. Whether you have 110 points or 70 points last year, it’s a new year and everybody is starting in the same spot.”

There’s no denying that the 2021-22 campaign was a smashing success for the Blueshirts, who completed the season with a record of 52-24-6 for a second place finish in the Metropolitan Division.

“I don’t know if you can call it success” Zibanejad said. “We had a good run last year, but it makes me and the group eager to get back to work. It’s not a given to make it to the playoffs and that should be our first goal.”

The Rangers capped a strong regular season with a memorable playoff run. It began by coming back from a 3 games to 1 series deficit to beat the Pittsburgh Penguins in 7. They followed that up with another 7 game series win over the first place Carolina Hurricanes. Eventually they fell in 6 to the Tampa Bay Lightning in the Eastern Conference Final.

“I hope our players got some good experience from (last season),” Gerard Gallant said. “Every team in our division got better so it’s going to be a battle. You can’t worry about what happened last year. Worry about the first goal and go from there.”

New York is being projected as a contender for the Stanley Cup this season based off of their recent accomplishments. Despite, oddsmakers predicting them to finish second again in the Metro, they realize the task ahead.

“We’re coming in with the same goal of making the playoffs,” Trouba stated. “Once you get into that tournament anything can happen. But the grind to get there isn’t easy and that’s where everyone’s focus needs to be.”

One thing is certain, the majority of all the players came to camp early eager for a return to action. The disappointment of failing to get by the Lightning after going up 2-0 in the series still gnaws at them.

“Whenever you get that close it leaves a hunger in your stomach you want to get right back at it and finish the job,” Barclay Goodrow explained. “The message is we’re all starting at the same point– we don’t have the 110 points from last season. You have the excitement of building on what we did and we’re all looking forward to it.”

As expected, there are always some new faces on every team. The Rangers are no different after watching close teammate Ryan Strome sign with the Ducks in free agency. All the Rangers trade deadline acquisitions including Andrew Copp and Frank Vatrano also signed elsewhere.

“Other than Stromer, who was here for a long time, the other guys came in pretty late,” Zibanejad relayed. “Obviously we have a few new players, but we still have a lot of good players here. I’m excited to see what’s ahead.”

The biggest offseason pick up was center Vincent Trocheck, who signed in free agency from rival Carolina in July. He skated with Artemi Panarin and Vitali Kravtsov in Thursday’s scrimmage. By all accounts the trio looked to have some decent chemistry out of the gate.

Of course, the other veterans that left are being replaced mostly by youngsters like Sammy Blais, who missed all but 14 games of last season with a torn ACL. The Kid Line of Alexis Lafrenière, Filip Chytil, and Kaapo Kakko are also expected to play bigger roles after gaining valuable experience in the postseason.

“I downplayed it last year but experience is important,” Gallant admitted. “In the playoffs, you don’t worry about a 20 year-old going up against a 30 year-old, you worry about playing your best hockey. But now we have to prepare to play 82 games again and get back to that spot.”

The Rangers are still a several days away from playing an exhibition game when they face the NY Islanders next Monday. However, the team is already focused on tomorrow and leaving yesterday behind them. 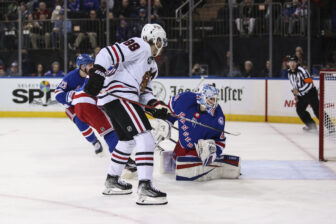