When the New York Rangers traded defenseman Nils Lundkvist to the Dallas Stars in exchange for a conditional first round and a fourth round pick, it added another valuable asset they can use at the next trade deadline.

Here’s a where their 2023 Draft Picks stand:

That first round pick acquired from Dallas is top-ten protected in 2023. So, if the Stars fail to make the playoffs this season and select 10 or lower, the Rangers automatically get Dallas’ first round pick in 2024.

However, when the NHL Trade Deadline rolls around on March 3, teams may already know what draft that conditional pick will land. Regardless, the Rangers have at least one first round selection to use for a blockbuster rental.

New York is considered a Stanley Cup contender this upcoming season which will make them buyers at the deadline. Now that they’re equipped with 2 potential first round picks for the next draft in June, GM Chris Drury can sweeten the pot in any high-profile trade.

The Rangers also have a deep talent pool of prospects that they can move.

Even if you take away Brennan Othmann as an untouchable, and categorize prospects like Will Cuylle, Matthew Robertson, and Adam Sykora as unlikely to move, the Rangers still have assets.

Players like Dylan Garand, Ryder Korczak, and Brett Berard are just a few interesting names that could be in the mix.

Understand one thing for certain, depending on the player the Rangers may be acquiring, a young roster player may also need to go the other way in order to make room in the lineup.

Over the summer there was rampant speculation regarding Patrick Kane. The Fourth Period’s David Pagnotta stated on NHL Network that the star was going to be traded by the next NHL Trade Deadline.

With the Chicago Blackhawks entering a full rebuild this season, GM Kyle Davidson met with the press on Wednesday to discuss the upcoming campaign. It didn’t take long for questions to be asked regarding the futures Patrick Kane and Jonathan Toews.

Whether it’s Kane or someone else, the Rangers have plenty of assets to acquire key pieces for another long playoff run. Of course, the connection between the two has been going strong since last season.

General manager Chris Drury has acquired a critical asset he can move for immediate help at the deadline… That is the crux of the matter for the Blueshirts, who will have two first-rounders with which to play as the rental market — in this space known as The Patrick Kane Derby — takes shape. 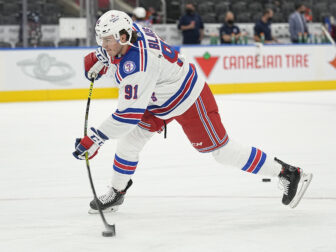