Rangers trade Nils Lundkvist to Stars for first round pick

The New York Rangers have traded disgruntled defenseman Nils Lundkvist to the Dallas Stars for a top 10 protected 2023 first round pick, per multiple reports.

The conditions per the New York Rangers press release is as follows:

I have to give Nils’ agent Claude Lemieux a ton of credit on this one.

Over the weekend, I wrote how Lundkvist was taking a big risk by not reporting to training camp in order to force GM Chris Drury into a trade. The overriding thought was that Drury’s track record with trade requests directed his way normally backfire.

There’s a laundry list of examples from his time as GM of the Wolf Pack, but his two most recent were Vitali Kravtsov and Alexandar Georgiev. Both asked to be traded last offseason, with Georgiev finally moved a year later and Kravtsov prepping for training camp.

Well, I couldn’t be more wrong and kudos to Lemieux.

The former Borje Salming Trophy winner as the SHL’s best Swedish-born defenseman struggled in his 25 game NHL stint last season registering 4 points. However, he has an elite shot and is projected to be a top-four defenseman that can quarterback a power play. 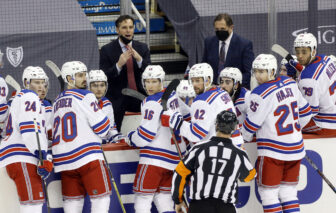