It’s been roughly roughly around nine months since defenseman Nils Lundkvist asked for a trade from the New York Rangers.

“We did request a trade when Nils was sent down last year,” his agent Claude Lemieux told Forever Blueshirts via text on September 1. “We hope something can get done in the next few weeks.”

General manager Chris Drury was asked about Lundkvist at the start of rookie camp and didn’t have much to say.

“I don’t really have any update on it,” Drury said per NY Post’s Mollie Walker. “Obviously, we think he’s a real good player. We drafted him. We’ve worked with him the last number of years. We certainly hope he’s here next week.”

In what can only be defined as a huge risk, Lundkvist is opting to stay in Sweden and not report to training camp. It is without a doubt a play to force Chris Drury into a trade.

Lundkvist, 22, was taken 28th overall in the 2018 Draft and has two years left on his entry-level contract with an AAV of $925,000. There’s no doubt that there are interested suitors out there. Some of the most likely candidates are the Vancouver Canucks, Detroit Red Wings, and the Montreal Canadiens.

The Habs seem like an obvious trade partner with Nick Bobrov there. He was head of the Rangers European scouting department when Nils was selected before Drury dismissed him last summer. Former Blueshirts GM and now Habs VP of Hockey Ops, Jeff Gorton is there as well. However, the two teams have not made a single trade since these changes were made and I’m not expecting one anytime soon.

Remember when Vitali Kravtsov asked for a trade last September? Everyone had him playing in a Canadiens uniform as soon as that news hit the wire.

Forever Blueshirts was told by someone familiar with the situation that it wasn’t going to be that easy. While Gorton would have interest, it would have to be at a discounted price. What was also relayed to me is that Gorton would be more inclined to acquire one of the prospect defensemen he drafted like Zac Jones, Braden Schneider, or Matthew Robertson.

Obviously, Schneider joined the Rangers in January when Lundkvist was sent down and is deemed an untouchable at this time. Whomever loses out in camp between Jones and Robertson this season may very well be looking for an out next.

At the end of the day, I believe this move will likely backfire on Lundkvist. It would probably have been better for him to arrive at camp and showcase his talents to possible suitors.

Right now, his trade value isn’t where Drury wants it to be or else a deal would’ve been done.

The former Borje Salming Trophy winner as the SHL’s best Swedish-born defenseman struggled in his 25 game NHL stint last season. He managed to pick up 4 points before being sent down to the Wolf Pack where those struggles continued registering 15 points in 34 games.

Lundkvist comes equipped with an elite shot and excellent offensive abilities. However, he’s on the small side at 5-11 and 187 pounds, which only exacerbates his issues in the defensive zone.

It will be hard for any GM to give up a top prospect or high draft pick for him just before the season starts. Plus he wants to be traded, and other teams can clearly see there’s no spot for him behind Adam Fox, Jacob Trouba, and Braden Schneider. Those factors all drive his value down.

While I understand Lundkvist’s frustration and desire to get a legit opportunity, Drury isn’t the GM to play this game with.

“In all these situations Chris Drury basically said ‘kick rocks’, I’m not gonna deal you,” Marek said. “And was comfortable to wait it out.”

I’m not sure you want to play chicken with a guy who has proven he won’t be forced into a move. You can ask Vitali how his trade request went. Not only did he re-sign this summer but showed up to New York a month in advance of camp per Drury’s demand.

Bottom line, I don’t believe Lundkvist is going to be traded before the start of the season. Which means he may be asked to report to Hartford and be suspended if he refuses. More likely than not, the Rangers will loan him to his former SHL team Lulea, where he can play until the next trade deadline hits on March 3. 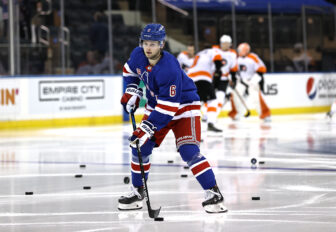