The New York Rangers named Zac Jones the rookies captain before they took on the Philadelphia Flyers rookie in their first of two scrimmages at Lehigh Valley, Pennsylvania.

“I found out yesterday, and obviously it’s just for these couple of games,” Jones said. “It’s a tremendous honor to wear the C and lead these guys.”

His assistants for Game 1 were Patrick Khoderenko and Matthew Robertson, who Jones will battle at regular camp for a spot on the third pair left defense.

There’s no doubt in my mind that Jones was given the honor because of his desire to be at rookie camp, even though he didn’t have to attend.

“They gave me the option and I said I wanted to come,” Jones revealed on Wednesday. “I wanted to be here and be a part of this. I’m trying to be a leader out here for the younger guys. For some of them it’s their first camp and I need to try and help them out.”

Jones admitted to being disappointed when he did not make the team out of camp for 2021-22, losing out to Nils Lundkvist. However, his attitude appears to stand in stark contrast to that of Lundkvist’s.

Currently, Nils has decided to stay in Sweden until his trade request is met. If that does not happen before the start of the season, he will likely be loaned back to Lulea, his former SHL team.

Rangers lose to the Flyers 2-1 in OT

The New York Rangers fell in OT to the Flyers during the opening minute of the 3 on 3 extra session. Although the 2-1 final score made the game appear close, it wasn’t as the Flyers out shot the Rangers by double digits.

If not for the heroics of goalie Talyn Boyko during the second half of the game, it would’ve been over in regulation. The 6-8 netminder was brilliant in the third, and even stopped a 2 on 0 breakaway in OT before Tyson Foerster beat him on a 2 on 1 at 39 seconds.

The game may have had a different outcome if Brennan Othmann would’ve converted off his early chance 10 seconds into OT.

“I thought it was a pretty good game,” Jones said afterwards. “First period was a little sloppy from both teams. Overall, I thought we played a good game. I didn’t think our execution was there but you have to expect that first game of rookie camp.”

The Rangers were down in this one and tied it on a Robertson power play goal assisted by Hunter Skinner and Maxim Barbashev. Unfortunately, that was all they could muster on Friday night.

“It was the first game in a couple of months for most of us,” said goalie Dylan Garand, who played the first half. “It’s a good start and we can definitely build off it going into tomorrow.”

Here’s a look at the lines and pairings that were used for the contest:

Fans should be able to stream Saturday’s game here. LINK UPDATED!. You can listen to the game here.

Note: To stream you must login with an account from one of the following providers: 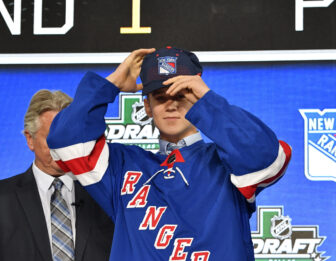