To a man, each member of the New York Rangers look bewildered at what just transpired. Head coach Gerard Gallant was beside himself as he witnessed his team implode in the third period up by three to only lose in regulation thanks to four unanswered Edmonton Oilers goals.

“Tonight, we were awful,” said a fuming Gallant. “It’s embarrassing and it’s not acceptable.”

This script has played itself out several times already, but none was as perplexing as Saturday afternoon on home ice. The team appeared disinterested and disengaged almost expecting the Oilers to just acknowledge their superiority en route to an easy victory.

To make matters worse, Gallant vowed back in October, after a third period collapse against the lowly San Jose Sharks led to an overtime loss that something like this would never happen again.

“I have no idea where that came from. I have no idea what went wrong. It was just a total collapse. It was embarrassing actually,” he said after the Sharks debacle. “I don’t expect to see that kind of period again.”

Fast forward a little over a month later and Gallant is still finding himself at a loss to the causes of such a collapse.

“I wish I could (explain it). A couple of dumb penalties didn’t help,” Gallant said. “It’s a team collapse, not one guy. That can’t happen.”

On Monday, the Blueshirts face the red-hot New Jersey Devils and will need a much better response than they had the last time this happened.

When the Rangers lost to the Sharks, they followed up that poor performance with a 5-1 drubbing on home ice to the Columbus Blue Jackets. And while Jaroslav Halak wasn’t very good in goal, the team simply didn’t execute as expected.

Gerard Gallant, who was excellent last season pushing all the right buttons needs to get this team back on the tracks. Nothing less than an absolutely strong 60 minute performance at home against a division rival is acceptable.

At the same time, results are what matter and if they don’t come away with two points the Rangers will need to have a serious introspection.

One thing is clear, Gallant needs to dress his best and most balanced lineup. No more keeping Vitali Kravtsov on the bench in favor of lesser skilled players like Ryan Carpenter or Sammy Blais.

Barclay Goodrow and Jimmy Vesey don’t belong on the top two lines for any reason unless there’s an injury. Kaapo Kakko needs to be placed back on the first line. Artemi Panarin needs to learn to play a more north/south game to fit better with Vincent Trocheck. And Libor Hajek should not be playing instead of Zac Jones.

Enough is enough with the endless tinkering.

Gallant may actually be over-coaching this squad in search of answers. It’s time he sets the lines and tells his players to figure it out once and for all.

What’s wrong with the Rangers?

While Gallant decides on his next course of action the Rangers leaders need to help him fix the ship.

“We got passive and put on our heels,” a distraught Jacob Trouba tried to explain. “Right now nobody is in a good mood. It’s obviously not what we want. We want to be a team that can hold on to leads and play good hockey. I’m sure we’ll talk about it tomorrow.”

Another of the Rangers leaders told the NY Post that they may be suffering from arrogance.

“I don’t know whether it’s arrogance or what, but we consistently refuse to do the things we know we need to do to win games,” Chris Kreider told The Post after the Rangers blew a 3-0 third-period lead and lost 4-3 to the Oilers at the Garden on Saturday afternoon. “We talk about it, we know what we need to do to close out games but we don’t do it.

“I don’t know why. But it’s costing us games. Every loss, the same story.”

That arrogance could be carry over from last season when they likely caught a lot of teams by surprise early on. That and Igor Shesterkin’s Vezina winning goaltending buoyed them until GM Chris Drury addressed the roster holes at the trade deadline that ultimately sent them to the Eastern Conference Final.

Of course, the trade deadline is not until March 3, meaning they’ll need to figure this out on their own.

“We have to play focused for 60 minutes,” Artemi Panarin said. “For sure It happened because we lost focus because probably we started thinking too comfy.”

Barclay Goodrow, who knows what it takes to win Stanley Cups was a lot more direct in his assessment.

“We need to be a lot better,” Goodrow said. “It’s a game you have to win and we had to win that game.”

Life is 10% what happens to you and 90% how you respond, as the saying goes. It’s time for the Rangers to respond accordingly.

The Rangers didn’t against the Oilers, but come Monday versus the first-place Devils they need to start winning.

Note: Various quotes were transcribed from the NY Rangers on Soundcloud. 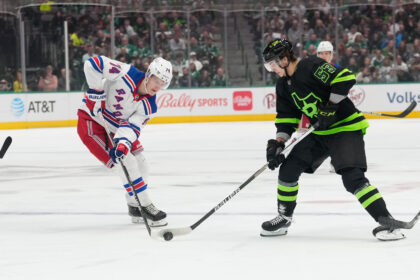