Today, the NHL announced it will reduce the standard isolation period for players who test positive for COVID-19 from 10 days to five. This is great news, as it will minimize the time and possible games missed by several key members of the Blueshirts.

The move follows similar changes made by the NFL and NBA this week and aligns with new recommendations from the Centers for Disease Control and Prevention.

The new protocol is subject to approval from local jurisdictions, which includes the five Canadian provinces that have NHL teams, ESPN reported. In Canada, the 10-day isolation requirement remains, so the new protocols, for now, apply to only U.S.-based teams.

Under the new rules, players can leave isolation after five games if they have a negative test and no symptoms. They still must wear a mask for five more days except when they are on the ice, ESPN reported.

The NHL has postponed 80 games this season due to COVID-19 outbreaks.

Per the NHLPA’s website, changes to the Protocol after a positive test includes:

All other aspects of the Protocol remain in place.

The NHL’s and NHLPA’s medical experts will re-evaluate these measures on or before Jan. 12. 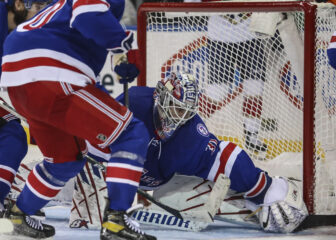