The New York Rangers surprised several people over the summer when they opted to protect Kevin Rooney in the expansion draft. Many felt that Colin Blackwell, who scored 12 goals and 22 points in 47 games last season would be kept.

Chris Drury obviously had different ideas and saw the 28 year-old as the center of his 4th line. The Rangers version of an Identity Line that would have Ryan Reaves on it, and eventually Barclay Goodrow.

This season, Rooney has registered five goals in 20 games. He also has a +1 rating, wins 50.7% of his draws, all while killing penalties and averaging 13:31 of ice time per night.

“Obviously, when you’re playing with Reavo and Goody, who’s won two Stanley Cups, Reavo’s been to the Stanley Cup and played 700 games, makes my job a little bit easier,” Rooney said about his line mates. “I just try to feed off those two and just keep playing my game.”

Rooney crediting his teammates for his success is no surprise. He’s considered a really good team guy. One of those essential “glue guys” you hear a lot about these days in hockey circles.

That’s why the Rangers need to extend him before his contract expires before the season ends. Rooney is finishing the final year of a two-year contract with an AAV of $750,000. He will be a UFA that will certainly have a lot of teams interested.

Drury wisely extended Reaves as soon as he was acquired, he needs to do the same for Rooney. A two to three year deal in the neighborhood of $1.5 million sounds right.

Considering the organization’s lack of depth at center, and the likely departure of Ryan Strome due to cap constraints, Rooney becomes even more important.

As Vitali Kravtsov awaits his inevitable trade out of the Rangers organization, he’s at least increasing his value with excellent play in the KHL.

The 21 year-old former first rounder has five goals and six points in eight games with Traktor since signing a one year-deal.

With Jeff Gorton now running hockey operations in Montreal, it wouldn’t surprise me if he went after some of his former draft picks not yet playing for the Rangers. 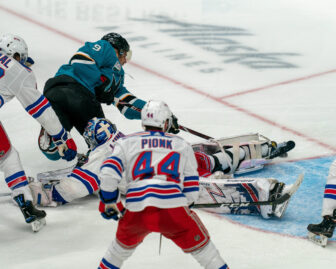 Also Read:
Sharks place Evander Kane on waivers and willing to eat half his salary; Rangers should stay away

Rumors indicate that Jeff Gorton is going to be hired by the Canadiens, plus Hurricanes looking at top defenseman John Klingberg. All that and more here.