Sharks place Evander Kane on waivers and willing to eat half his salary; Rangers should stay away

The San Jose Sharks have placed Evander Kane on waivers today. The San Jose Mercury News reported earlier that they would, and assign him to the AHL’s San Jose Barracuda if he clears on Monday.

The New York Rangers could certainly use an affordable top six winger. Even though Kane is readily available at reportedly half price, the team should be very patient and careful before considering any trades.

Evander Kane available at half price

Kane, 30, has not played this season and has not practiced with the Sharks since the start of training camp back in September.

On Oct. 19, Kane received a 21-game suspension from the NHL for violating COVID-19 protocols. He reportedly submitted a false COVID-19 vaccination card.

“Over the past few weeks, we have been discussing Evander’s return to San Jose,” Kane’s agent Dan Milstein said in a statement. “We were not surprised by the Sharks’ decision to put him on waivers and, if he does clear, he will report to the Barracudas. Evander is looking forward to resuming his NHL career this season.”

Kane is in the fourth year of a seven-year, $49 million contract he signed with the Sharks in May 2018. He is still owed more than $20 million on that deal, per the Mercury News.

The latest rumors indicate San Jose will eat 50% of his salary in a trade and Milstein has started contacting teams.

The Rangers should steer clear

Since the Kane news broke, there’s been some rampant speculation as to destinations.

Larry Brooks of the NY Post noted in his Slap Shot column that an “Eastern Conference team has shown considerable interest in dealing for Evander Kane.”

Some chatter as to who those teams may be are the Hurricanes, Lightning, and Islanders. Or as some have put it, places with strong leadership in the locker room.

Any team up against the cap may find Kane’s offense at just $3.5 million over the next three season attractive, but I don’t believe the Rangers are one of them.

The Blueshirts obviously are in the market for a winger that can play on the second or third line, but the team is winning. There’s no reason to risk the chemistry in the room, especially with reports that Kane’s teammates in San Jose requested he be moved.

This is one player for multiple reasons, including three more years on his contract that the Rangers should stay away from. 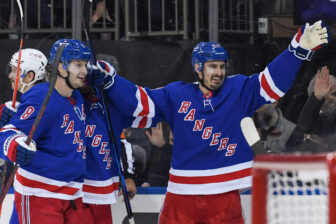 Also Read:
New York Rangers are exactly what their record says they are; excellent

Lemieux will have an in-person hearing for biting Tkachuk, Read more.