New York Rangers are exactly what their record says they are; excellent

The New York Rangers currently sit in third place in the Metro Division with a record of 13-4-3 for 29 points. Their .725 winning percentage ranks 4th in the NHL.

At the beginning of the season, Igor Shesterkin stole some games as the group learned a new system under head coach Gerard Galant. There were also some new players on the team with roles still being defined.

Yet, the Rangers kept finding ways to win and their record makes it clear, this team is for real.

Rangers taking it one game at a time

“We weren’t happy with our first 10 games (of the season), even though we had a good record,” Gallant said last week. “I think we’ve played better since then and it’s coming together.”

The Rangers followed up Friday afternoon by weathering a first period in Boston when they were outshot 17-3 by the Bruins before rallying to score three times in the third period for a 5-2 victory.

The resilient Rangers are 7-1 since ending a four-game road trip with a 6-0 loss to the Calgary Flames on Nov. 6.

“I don’t set expectations, but I am real happy with where we are at,” Gallant said of his team’s record. “I take it one game at a time.

The Blueshirts have scored 30 goals during their eight-game run, and their 29 points through 20 games under coach Gerard Gallant are the most for a first-year New York coach since Phil Esposito had 30 points in his first 20 games in 1986-87.

“I would say it’s a good feeling,” Rangers center Ryan Strome said. “But I also think that it’s a group that’s not satisfied. I think we’re starting to feel like a winning team. I think we’ve got a different feel to our team.” 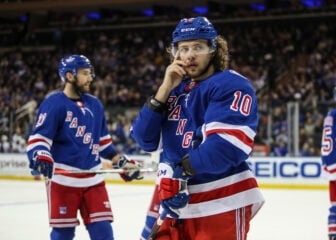 Thanks to the team’s most recent good run, the Rangers have flipped the script on their goal differential now a +6.

Other key stats the Blueshirts are climbing up with each passing game is the power play clicking at 20.3%, good for 12th in league. The penalty killing has had a bit of a hiccup operating at 80.7% which is 18th in the NHL.

Individually, Adam Fox leads all NHL defensemen in scoring with 21 points in 20 games. Chris Kreider’s 15 goals ranks third overall, and his 9 power play goals is good for second in the NHL.

Other stats include Ryan Reaves’ 75 hits which is 4th best.

Bottom line, this New York Rangers squad has a lot going for it and the excellent play is being represented in their record. Best part about it all is there’s still more room to improve.

*All stats via NHL.com 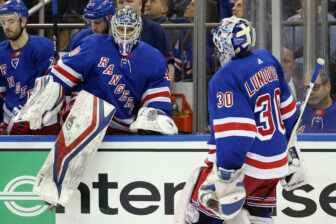 Rumors indicate that Jeff Gorton is going to be hired by the Canadiens, plus Hurricanes looking at top defenseman John Klingberg. All that and more here.