Rangers Panarin on his fine for Marchand glove toss: “I don’t like that guy”

Artemi Panarin spoke after New York Rangers practice today, and as you could imagine the main topic was what Brad Marchand said to him.

Both players were both tossed from the game, but it was the Blueshirts’ forward that received a $5000 fine for throwing his glove at Marchand.

The Breadman was fined the maximum allowable under the league’s collective bargaining agreement for throwing his glove at Boston Bruins forward Brad Marchand following a verbal exchange at the bench during Friday’s game.

After the game, Marchand had some fun about the subject of their conversation. “We were just asking each other how Thanksgiving dinner was and he didn’t like what I ate,” he said after the Bruins’ lost 5-2 at home to the Rangers.

Of course, there was no Thanksgiving discussion as Marchand went right for an obvious sore spot. Remember, Panarin needed to take a leave of absence last season due a former KHL’s coach’s unfounded allegations.

The 30 year-old didn’t hold back on his feelings about Marchand. “I don’t like that guy,” Panarin said.

As for the $5000 fine, he thanked former GM Jeff Gorton for his big contract so that he would be able to pay the league for his “misconduct.” 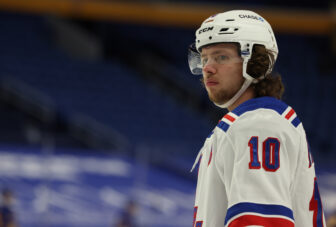