The Hartford Wolf Pack closed out October with two wins after struggling in the first two weekends of the season as prospect Dylan Garand picked up his first win.

Hartford snapped their 0-2-1-1 streak last weekend by defeating the Hershey Bears 4-2, followed by a thrilling 3-2 overtime win against the Charlotte Checkers. The club showed significant improvements on defense while the offense began to roll despite missing Julien Gauthier, who is with the New York Rangers

Hartford performed well in both outings, which is a good sign entering November. The club was ready to play, from goaltending on out not a single player missed a beat.

Entering this weekend, Hartford is 2-2-1-1 for six points. That ranks the group seventh in the Atlantic Division and 11th in the Eastern Conference. Keep in mind that a few points separate Hartford from the rest of the teams in the division.

The 23 year-old forward returned to Hartford’s lineup last Friday against Hershey. He played with a chip on his shoulder and was noticeable in all aspects of the game. Trivigno recorded one goal and one assist for two points in Hartford’s first win of the season. He prospect played alongside Gustav Rydahl and Turner Elson in the matcha and that line was buzzing throughout the game.

Trivigno assisted on the first goal of the game from Rydahl. The sequence was superb as the group was aggressive on the play and moved the puck well.

In the third, the talented prospect registered his first goal of the season with a beautiful backhand, fending off the Bears defenseman. In addition, he was aggressive while Hershey was in Hartford’s zone as they were pushed out and he transitioned the group from defense to offense.

After being held out of the lineup for two games, Trivigno made a case on why he should remain in the lineup the rest of the way. He was given the opportunity and made the most of it. Trivigno was held off the scoresheet Saturday but had strong opportunities for Hartford and helped push the offense in a close game.

Third time’s the charm for Domingue. After being held from the win column in his first two tries (0-0-1-1), the veteran found himself with a W in Friday’s game against Hershey.

While the stats may indicate not a great start to the season, the goaltender played exceptionally well. Hartford’s defensive struggles was bailed out by Domingue and Garand often. Domingue was close to his first win of the season in his other two starts (OT and SO losses). With better support by Hartford’s defensive group, Domingue locked down the crease against Hershey and only two goals were given up. The veteran stopped 19 of 21 shots in the game.

Saturday’s game against the Charlotte Checkers was tight between the clubs. The 20 year old earned his first professional win in his third attempt as well.

Prior to the game, Garand was 0-2 and adjusting to the professional ranks. In his two losses, the prospect showed impressive ability and kept cool in all situations. To his credit, this first win was not easy, especially against a tough Checkers club. The goaltender faced two 5 on 3’s in the contest, and had to withstand a big third period push that included 4 penalties against. Hartford maintained a one goal lead throughout the contest, up until Charlotte tied the game twice, both in the third as he faced 16 shots. His heroics gave the Pack a chance to redeem themselves and they did with an OT winner just 47 seconds in as Garand stopped 24 of 26 shots in the game.

Dylan Garand improves to 1-2 with a 2.68 goals against average and a .911 save percentage.

As I discussed in last week’s edition of Wolf Pack Weekly, one concern was the struggles from the blueline. The transitioning was not stellar, which led to multiple mistakes. Fast forward to this weekend, as they worked on those deficiencies and played well as a unit.

In both outings, the defense was excellent on their reads and limited odd man rushes. They were aggressive too with their game and really cut off passing lanes.

Overall the penalty kill was excellent, especially against the Checkers. Hartford blocked shots and were strong clearing the puck. The penalty kill units have been busy and performing well, which is a confidence booster for the defense.

The forward group also contributed to the improvements with defense. Everyone was committed to help out the goaltenders. A week’s worth of practices and addressing struggles paid off for Hartford. This was a great turnaround and you have to give credit to the coaching staff.

Hartford’s captain secured his first two goals of the season this past weekend as he scored one in each game. The veteran has points in four straight and was held off the scoresheet only once through six games. Brodzinski leads the club in points with six (2G – 4A).

The forward continues to show good offensive production in addition to his leadership. The extension continues to pay dividends for the organization.

Goals From the Weekend

Check out Hartford’s goals from this weekend.

Hartford was down two forwards in the third period in Friday’s game.

The arena operator, Oak View Group (OVG) is currently in discussions with the Capital Region Development Authority (CRDA) regarding a partnership to transform the XL Center. As the long road continues to modernize the dated building, there is optimism that the building could be renovated in the near future.

As part of the potential partnership between OVG and CRDA, OVG would contribute funding to the renovation plan that was backed by the CRDA. Originally the CRDA had a $250M renovation plan that would overhaul the XL Center from top to bottom. However, that price tag was expensive for the state of Connecticut to commit to, which resulted in a new strategy from the CRDA.

The plan is for a $100 to modernize the lower level of the facility. Amenities would include additional bathrooms, event level club and suites, loge boxes, and other premium seating options throughout the lower level of the arena. Additional upgrades would be under the hood, staging, and concourse enhancements. The upper level would remain untouched. The only addition to the upper level would be a moveable wall to expand or reduce capacity of the XL Center.

OVG is interested in partnering with the CRDA as they believe the XL Center can become a “premium concert venue”. The focus of seating is approximately 11,500 to 13,500, depending on the final configuration for renovations and focus on concert seating.

The next steps in the process would be an agreement of a partnership. The partnership would allow OVG to run the facility for a lengthy period of time in addition to a framework of splitting revenue, expenses, etc…

For additional information, check out this article from the Hartford Business Journal.

Construction of the Sports Betting Lounge began in the summer of 2022. The original completion date was September. Unfortunately, as a result of delays from shipping and manufacturing of items, the opening is pushed back to Spring 2023. The CRDA completed two agreements to have sports betting in place at the XL Center. The first one is through the Connecticut Lottery (operations) and the other is through the Connecticut Office of Policy and Management (revenue funding structure from profits).

For additional information, check out this article from the Hartford Business Journal.

Additional renderings of the lounge can be viewed on the CRDA’s website.

Hartford will be playing 11 games in November. They will be on the road for the next three of four games. The split has Hartford playing five games at home and six on the road. 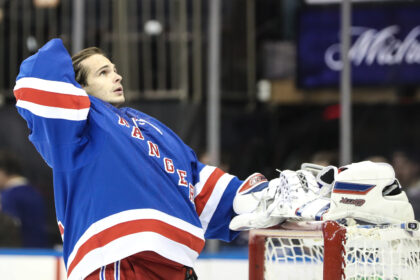