The New York Rangers are set to embark on their 96th season, and this campaign may have some of the highest expectations in their rich history.

When the Rangers start their season next Tuesday night they will no longer have the element of surprise on their side.

How could they?  A team that won 52 games, 110 points, a 52-goal scorer, a Vezina winner, and a Jack Adams Finalist is an incredible resume to fashion in today’s NHL.

This team can no longer be satisfied with just winning hockey games. The attitude of just making the playoffs as the goal will not be enough to placate Rangerstown.

This season, the team will need to carry the No Quit in NY mantra to new levels. They indeed have some unfinished business to address.

There’a plenty of questions to answer with training camp concluding on Saturday night. These questions have less to do with whether players like Jimmy Vesey, Zac Jones, and Libor Hajek will make the opening night roster and more about how this team will respond to a season with high expectations.

It all starts with the man behind the bench. Can Gerard Gallant get this team to play with the heart and passion he did last season?

Gallant pushed every correct button with precision last year. He kept his team focused and out of the quicksand when the club lost hockey games. The Rangers lost three consecutive regulation games just once last season, a testament to their consistency throughout the 82 game season.

Will he be able to adjust to the loss of Ryan Strome, Andrew Copp,  Frank Vatrano, and Alexandar Georgiev and find success with Vincent Trocheck, Jaroslav Halak, and the reemergence of Vitali Kravtsov?

Opposing teams will place a huge target on his back, they will look to aggravate him in ways he has never experienced as a pro.

The 31 year-old will be leaned on by his teammates to continue his adept scoring touch. Kreider lit the lamp 52 times last season, scoring goals mostly off deflections with 17, which also helped him lead the NHL with 26 power play goals. He even added 3 shorthanded goals for good measure.

He will need to be that good again to help this team get back to the Eastern Conference Final and help them reach the Stanley Cup Finals this time around.

Another level for Artemi Panarin

Panarin is the man the team looks too for offensive production. He had a harder time in the playoffs finding space and most often would pass up a good shooting opportunity to pass the puck off.

At the start of training camp, the Breadman acknowledged he needed to be more in the middle of the ice during going forward. His 96 points led the team last season and if he can find what he is looking for in his own game, Panarin could exceed his own expectations.

Jacob Trouba was named captain this offseason to the surprise of fans, but not to his teammates.

Trouba had been the de facto captain for much of last season. Head coach Gallant was able to watch what Trouba brought to the ice every day to finalize the decision. His teammates also recognized the true leadership he possessed even with a committee of players sharing the responsibility.

In the past, the weight of the C on the jersey can be a heavy load to bear. This was the case with former Rangers captain Ryan McDonagh. He gave his heart and soul to the Blueshirts but never appeared fully comfortable as the captain.

Trouba said that nothing will change now that he has the C and he’s going to remain true to himself and the team.

Will the Kid Line stay together?

Alexis Lafrenière, Filip Chytil, and Kappo Kakko (AKA: Kid Line) have created a bond that at times made them the best line the Rangers put out on the ice in the playoffs. Many times in the postseason, they were relied upon to get the team going in the right direction.

There is a good chance this line gets broken up early on in this season, not because of their lack of offense or flaws on defense, but because the team is struggling to find a winger for their top line with Chris Kreider and Mika Zibanejad.

Lafrenière, the first overall selection in the 2020 NHL Draft, fits in nicely on the top line.  He is destined to make the jump there which would increase his ice time and scoring chances but would disrupt a young and energetic third line.

Gallant has been steadfast in keeping this line together when all three were in the same lineup for preseason games and it looks like the route he will take to start.

Last season, Igor Shesterkin finally stepped out of the shadows of the King Henrik Lundqvist, and took a major step toward becoming one of the best goalies to play in the NHL. He won the Vezina Trophy as the league’s top goalie and this season has set his eyes on a bigger prize in the Stanley Cup.

He is on top of the mountain for now, but can he match and exceed what he accomplished last season?

A more comfortable player than when he first arrived midseason three years ago, Shesterkin needs to continue his growth with the Rangers, but repeating the numbers that he had last year will be no easy feat.

Shesterkin led the league in GAA (2.07) and Save Percentage (.935). Two big reasons he took home that prestigious hardware last season.

A repeat of this success will be required for the team’s success again this season. 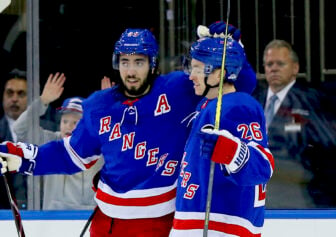 There are many more questions at the forefront of this organization. Can K’Andre Miller take the next step and be in the Norris Trophy conversation? Can the duo of Adam Fox and Ryan Lindgren continue to be a top defensive pair in the NHL? Will Zac Jones and Braden Schneider be able to do the job as the team’s third unit on the blueline?

The answers to these questions plus whatever other adversity comes the team’s way will be answered during the long marathon season.  The more correct answers found should lead to a path which ends at the Stanley Cup Finals. 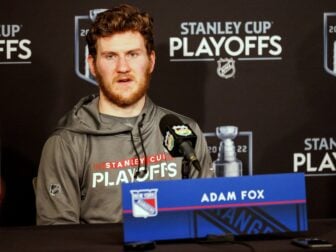