The New York Rangers acquired Adam Fox from the Carolina Hurricanes on April 30, 2019 for the price of two 2nd round picks (2019 and 2020). It was an absolute steal, but the Long Island native was basically set on only playing for the Rangers by refusing to sign an ELC with either the Calgary Flames or Hurricanes.

Former Rangers GM and now VP of Hockey Ops for the Montreal Canadiens, Jeff Gorton all but confirmed that speculation. Appearing on the The Raw Knuckles Podcast, Gorton gave some inside details to host Chris Nilan on how the trade went down.

Inside the Adam Fox trade

Fox had a great rookie campaign with 42 points in 70 games. It was his second season that turned heads when he garnered 47 points in a 56 game COVID shortened season. By capturing the Norris Trophy, he became only the second NHL defenseman since Bobby Orr to win it in their sophomore season.

So how did the Rangers land Fox, who was drafted by the Calgary Flames in the third-round of the 2016 draft. A clue came when he was traded to the Carolina Hurricanes in 2018 after not signing an entry-level contract.

“Foxy had been drafted by Calgary and already traded once,” Gorton began. “As he got closer to the luxury that college players have of free agency, if you’re four years out from being drafted, he figured out he can play where he wants to play. We started doing the math and figured out that might be in New York.”

Gorton then admitted before making the trade that he needed some convincing. Enter Fox’s head coach at Harvard, Ted Donato.

“Just talking to Donnie Waddell (Carolina GM) and working on that deal, he wanted a first but we went back and did a few things,” Gorton explained about the negotiations. “I called Teddy Donato in Harvard, who played for me and told him they’re asking for a second and a third or maybe two second rounders. He said to me, ‘Then why did you hang up?’ And so that’s basically (how it went down).”

So what was the apprehension for Gorton to make the deal?

“We all loved Adam Fox and what he could do,” Gorton said. “The only question was because he played 35 minutes a night in Harvard, people thought that he couldn’t skate. But you go and keep seeing an elite player going back out there, [you realize] he was tired.”

Although Fox, a lifelong Rangers wanted to come to New York, it’s evident that Gorton didn’t see it as the slam dunk trade it turned out to be.

Fox, 24, recorded a career-high 74 points in 78 games in 2021-22. He added another 23 points in 20 playoffs contests for good measure. And while this is just the beginning of his young career entering year four, he’s already one of the great trades of all-time for the franchise.

The Rangers talented defenseman was recently ranked by NHL Network as the 16th best player in the league.

“When you see Adam Fox if you never saw him play hockey you’d look at him and say he doesn’t have size (5-foot-11, 182 pounds), he’s not really that fast of a skater,” Rupp said. “But when you watch him on the ice, he’s all over the place. … I just find him to be a very smart offensive player from the backend.” 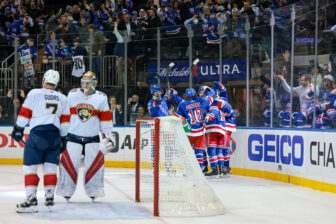 Editor’s Note: Correction made regarding 2016 Draft.