The New York Rangers have five players on NHL Network’s Top 50 List with Igor Shesterkin and Adam Fox being announced on Sunday.

In the playoffs, he was the team’s second leading scorer with 23 points in 20 games. ESPN Analyst and legendary Rangers captain Mark Messier gave some glowing remarks about Fox’s play in the postseason.

“Adam Fox put on a show. He was the best player on the ice,” Messier said. “He reminded me of Brian Leetch with the way he controlled the entire period.”

Fox is entering his fourth season in the NHL.

“When you see Adam Fox if you never saw him play hockey you’d look at him and say he doesn’t have size (5-foot-11, 182 pounds), he’s not really that fast of a skater,” Rupp said. “But when you watch him on the ice, he’s all over the place. … I just find him to be a very smart offensive player from the backend.”

Igor Shesterkin in at 11

His postseason included a 3-1 series deficit comeback to beat the Penguins in Round 1 and was followed by a win over the Hurricanes in 7 as well. New York would run out of gas and fall to the Lightning in the Eastern Conference Final but Shesterkin was a stellar.

“Igor steals games, he steals goals away from the opponent,” Rupp said. “… If it wasn’t for Igor’s first half of the season, and he was great all the way through, this team would not have made the playoffs. … Igor was lights out.”

Shesterkin won the Vezina Trophy last year as the league’s best goalie and is favored to repeat. 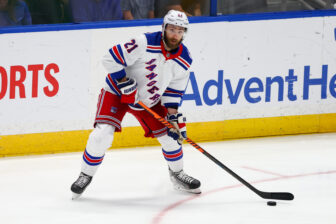 Domingue, 30, cleared waivers and was assigned to the Hartford Wolf Pack on Sunday.

The left-handed goalie played in two preseason games and stopped 29 of 32 shots in 60:32 of total ice time.

The New York Rangers inked Domingue this offseason after facing him in the first round of last year’s playoffs. In six games against the Rangers, he posted a 3-3 record. He signed for 2 years with a cap hit of $775,000. 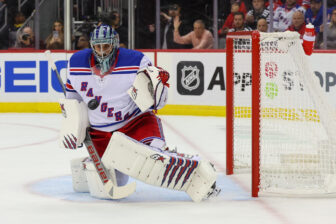