The New York Rangers held their first practice on their Rhode Island bonding trip giving everyone a look at the projected PP units for the 2022-23 season.

Per multiple reports the units looked as follows:

There’s really no surprises for the first PP unit because Gerard Gallant stated early on that Trocheck was taking Ryan Strome’s old spot.

“There’s not a lot of difference,” Gallant said of PP1. “Troch fills in Strome’s spot– they’re both right-handed shots. They both could move and shoot the puck. I don’t think [the power play] is going to change.”

Seeing the Kid Line along with Vitali Kravtsov is interesting but I wouldn’t bank on that being the case if it doesn’t work out of the gate. Zac Jones has shown a clear ability to QB a PP and could easily be moved onto the unit.

The biggest question of course will be just how much time PP2 will get this season? Last year, the first unit helped the Rangers rank 4th in the NHL at a 25.2% success rate with 55 goals on the man-advantage. Half of those were scored by Chris Kreider, who led the NHL with 26 power play goals.

Gallant was pretty honest about the situation when he cracked a joke about how he expected the special teams time to play out.

“We’ll see what happens,” he smirked. “Hopefully that (first) unit gets real hot. Not much time to give the kids so they’ll have to wait their turn.”

In the end, a lot will be predicated on a repeat performance by that first unit on the man advantage. The exchange of Trocheck for Strome may appear to be a big one at face value, but Kreider believes it won’t be much of a change at all.

“The important thing is bringing in a righty for a righty,” net-front presence extraordinaire Kreider told The Post following Monday’s practice at this Rhode Island outpost. “A lefty [replacing Strome] would change the element and the dynamic.

“The guy in the middle has to be a shot threat. If we had a lefty there, we’d have to run everything off the other side.”

As these final two preseason exhibition games conclude, the lineup and special teams personnel will be abundantly clear.

The New York Rangers next preseason game is tomorrow at Madison Square Garden as they take on the Boston Bruins. Exhibition action will conclude on Saturday night, October 8th on Long Island versus the Islanders. Both games scheduled for a 7 PM ET start.

The Blueshirts open the 2022-23 schedule with an Eastern Conference Final rematch against the Tampa Bay Lightning on October 11 at Madison Square Garden. Puck drop for the home and season-opener is slated for 7:30 PM.

On Monday, the Rangers announced two time changes for the 2022-23 regular season. The games versus the Detroit Red Wings on November 10 and February 23 have both been moved up from 7:30 PM ET to 7 PM ET.

You can find these changes also here. 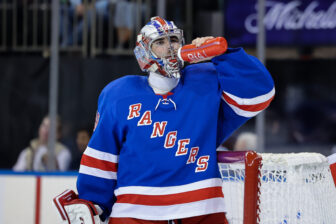