How The Salary Cap Affects The NY Rangers’ Training Camp With the 2015-16 preseason officially underway, the long jonesing of the off-season is finally over, as fans will now enjoy the few weeks prior to the season where prospects, journeymen and minor-leaguers will compete for roster spots. Of course, unlike Rangers camps in years past, there aren’t many holes to fill for the upcoming season. In fact, I would submit that the Rangers top-20 roster list is all but finalized, leaving the audition process limited to a few spots at the bottom of the totem pole.

Here is my personal projection for the virtual “shoe-ins” we should logically expect to see survive the fial cuts: Before we proceed, allow me to make a few qualifications about this list:

– Kevin Hayes could very well return as the 3rd-line center, in which case I’d suspect Oscar Lindberg, in turn, be relegated to the wing. In any event, I feel Hayes & Lindberg will make the cut in some capacity, whether it be this dynamic or the other. I do not believe Lindberg will be put on waivers (as he would need to be put on and clear in order to return to the AHL), simply because he’s too valuable an asset to waive. If anything, should Lindberg be forced out of the roster, one would thing Jeff Gorton would trade the defensive forward, if only you avoid losing him for nothing.

– The Top-Six defensemen are all but written in stone to return to the Rangers’ rearguard, with a trio of blueliners competing for the 7th spot. One would thing Raphael Diaz is the favorite for the spare defenseman gig, but former 1st-round draft picks Dylan McIlrath & Brady Skjei will obviously get a serious look. (Of the three, only Skjei can be assigned to Hartford without waivers, as Diaz & McIlrath have aged out of exemption).

– Should there be an injury this pre-season, it’s important to note the following: if a player is placed on IR (Injured Reserve), then a replacement player can be recalled without counting as an official roster spot (so a team with 23 players, with one IR, can add a 24th roster spot without violating the league’s 23-man limit). But, there is no salary cap relief on IR, so a team must be able to accommodate a call-up without going over the salary cap ceiling. However, should a player incur a seriously long-lasting injury, he can be placed on Long-Term-Injured-Reserve (LTIR) where a call-up may both substitute the injured player’s official roster spot AND do so while the team gets cap relief. In other words, an injury lasting less than a month bust be able to be remedied without cap relief, but an injury lasting 10+ games or at least a month can indeed be remedied with cap relief.

… Is anyone still reading?…

So, for the sake of this exercise, we will assume one of the 20 players twists an ankle or breaks a finger, and the Rangers will look to have 23 players fit under the $71.4 million cap by October 1st. In this event, the Rangers have $2,076,000 to employ three players vying for the big-league roster spots.

Let’s look at this chart: The good news is all but one of the combinations will immediately fit under the salary cap. The bad news is that the Rangers won’t be operating with much cap space to begin the year, meaning they could be put into a tight spot should a slew of injuries strike in a concentrated amount of time. The 10/1 column represents cap space available on October 1st, and the 2/29 column represents that projected amount of cap space for February 29, which is the 2016 NHL trade deadline. And once again, as a reminder, in rows where Glass is presumably buried in the minors, he will still be taxed $525,000 against the salary cap because of the size of his albatross of a contract.

Brian Gibbons, Glass, Jayson Megna, & Jarret Stoll will be competing for the 13th & 14th forward spots (potentially only a 13th spot if the roster stays healthy). All require waivers for AHL assignment. All but Glass were signed to small 1-year deals this summer, and all but Glass can be banished to the minors with no effect on the Rangers’ salary cap. Obviously Gibbons & Megna were impressive in Monday night’s pre-season opener against the New Jersey Devils, while Stoll will debut in tonight’s match against the Philadelphia Flyers.

So taking these factors into consideration, I’d like to offer my warranty-free two cents on what I think may come to happen:

– It seems Glass is likely to be waived. I do not think he’s a “threat” to be claimed, unless one of the other 29 teams in the league are looking for a new way to burn money. I do not think the Rangers, nor most contending NHL teams, “need” a scrapper anymore. Or, if they did, the Rangers could sign a fighter for the league-minimum ($575,000), bury Glass anyways, and still have more cap space than simply keeping Glass on the roster.

– Stoll’s skill as a bottom-end center with the ability to win faceoffs likely make him a favorite. His cap hit is only $200,000 more than that of Gibbons or Megna, so his skill-specialization will likely offset his slightly more expensive price tag than the other two.

– This leaves Gibbons and Megna in a dead heat for the 14th forward roster spot, which may not even be necessary at all should the top-13 forwards remain healthy.

– As I stated earlier, Diaz is probably the favorite to chair the 7th defenseman spot. However, in the event of an injury to Ryan McDonagh, Marc Staal, or Keith Yandle… I would expect Skjei to be recalled from Hartford, and perhaps given the chance to play a lot of NHL minutes. Diaz and McIlrath are right-handed, while Skjei is left-handed, so I will go out on a limb and predict Skjei plays top-pair in the AHL, and gets a daunting workload should an injury occur with one of the NHL lefties. Unlike Diaz, it may be more prudent for long-term development for Skjei to play regularly big minutes in Hartford, rather than be the Rangers’ 7th defenseman, only getting chunks of playing time in the dust of top-six injuries.

– McIlrath remains a mystery; his $600,000 cap hit is the smallest (and subsequently most inviting) of any of the Rangers’ defensemen in the running… but does he have the skill to make the team? Would Gorton risk putting him on waivers, would Gorton hide McIlrath as the 8th defenseman on the roster to avoid waiving him (even if it meant playing him very little)? Is there a logical trade involving McIlrath to be hashed out, when the kid is at such a tenuous juncture in his career? Not only will I decline to make a prediction, but I’ll be very interested to see how this plays out. But I peg McIlrath as third in the three-way race for the 7th D spot. 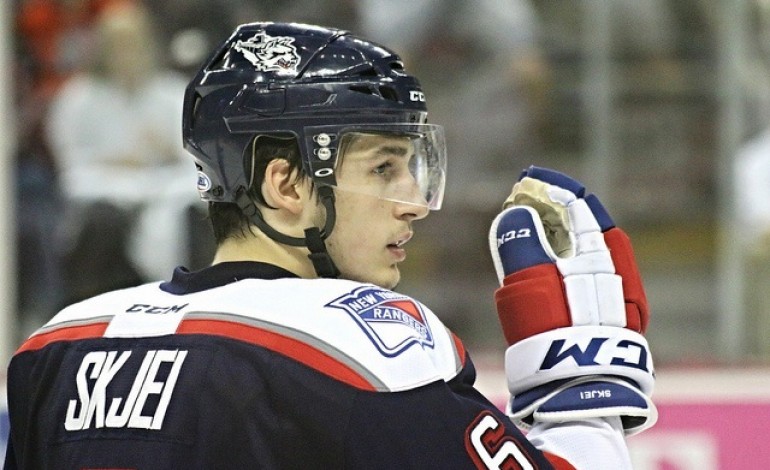 And finally, a note about the two Professional Tryout Offers attending camp: defenseman Brett Bellemore & forward Kirill Kabonov. I do not think Bellemore has any shot of being signed by the Rangers (though he could be auditioning for an AHL contract somewhere on the circuit). Not only do the Rangers have a ton of defensemen under contract, with no real place to put a guy like Bellemore, but they only have two remaining contracts to give out before reaching the NHL maximum allotted amount of 50. As for Kabonov? The former Islanders’ 3rd-round draft pick, who played in Sweden last season, will get a look. If he goes on to earn a contract, I’d still expect him to start in the AHL, and have quite a long journey & string of bodies ahead of him before getting a sniff of NHL time.

All and all, if you want to emulate being a couchside member of Broadway’s coaching staff the remaining string of pre-season games, I’d look for these factors: Who would you rather keep, Gibbons or Megna? Are we sure Stoll is worth his weight in skill, his favorable experience and on-ice reputation aside? Is Skjei so overwhelmingly good, it would be a sin to NOT have him as the 7th defenseman rather than on the top-pair in Hartford (think long-term development)? Is there any way in hell Kabonov can parlay a PTO into a 13th forward roster spot?

We’ll see how it unfolds, as we inch ever so slowly towards the regular season opener fifteen days from now.