How to watch Rangers vs Bruins clash on ABC and ESPN+

How to watch Rangers vs Bruins in the final meeting of the regular season between the clubs. Today’s contest in on National TV and being carried by ABC and ESPN+.

The Blueshirts are also fighting for first-place in the Metropolitan Division with the Carolina Hurricanes. Both teams are tied with four games remaining. Carolina plays the New Jersey Devils on the road at 12:30 PM ET.

This is the last regular-season road game of the season for the Rangers.

How to watch Rangers vs Bruins (plus listening and streaming info)

Today’s game is a National Broadcast on ABC. Check your local listings.

You can also stream the game on ESPN+.

Note: MSG Networks will have pregame and postgame coverage for all remaining regular season national exclusive telecasts to keep fans close to the action down the stretch run – April 23rd at Boston on MSG2.

Additional Listening Info: SiriusXM subscribers can listen to the game on Channel 221.

This will be final meeting between the teams as the Rangers look to sweep. New York has won four of their last five against Boston.

Mika Zibanejad – 39 GP, 14G-7A-21 PTS – Zibanejad has multi-point games in two of his last five games against Boston. In those two games, Zibanejad was a combined plus-5 rating. In 39 games against the Bruins, he has at least one point in 18 of them.

Ryan Strome – 28 GP, 6G-11A-17 PTS – Strome has five points (2G-3A) in his last five games against the Bruins. In the first matchup of the season, Strome had a goal and an assist in the win in Boston. Last February, Strome had a three-point game (1G-2A) at MSG against Boston. Strome has goals in six of 28 games, assists in eight of 28 games and points in 11 of 28 career games against the Bruins.

Last One for the Road: The Rangers 52 road points is tied for 4th in team history.

Artemi Panarin is 4 points away from his first 100 point season.

Frank Vatrano is 3 games from 400 in his career. 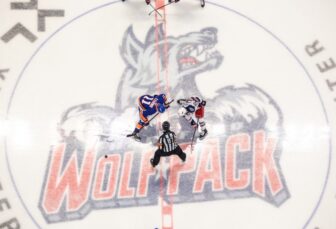 What’s going on in Vegas? The Golden Knights are refuting reports that goalie Robin Lehner is having season-ending surgery. Read more.