Igor Shesterkin and Rangers get another shutout in win over Jets 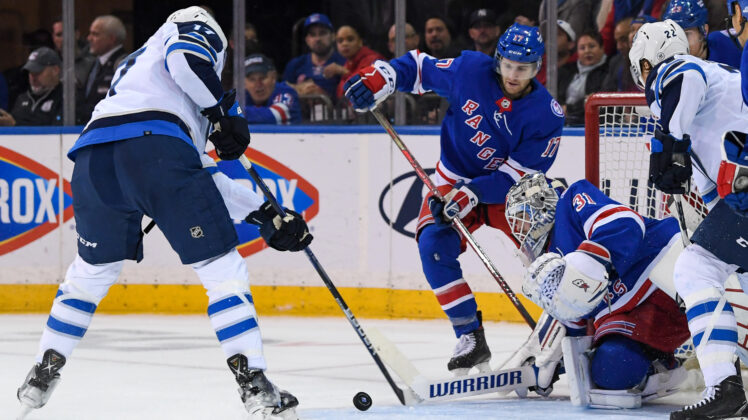 Igor Shesterkin and the New York Rangers had their sights set on first-place in the Metro Division coming into their matchup against the Winnipeg Jets.

Starting the game two points behind the Carolina Hurricanes, the Blueshirts went to work and registered their third straight shutout. When the final buzzer sounded it put an astonishing 50 wins in the books with five games left to play.

“First place is one thing for sure,” said Andrew Copp about what’s motivating the team. “It’s right there for us, especially with (playing) Carolina next week. That’s something we’re focused on and just trying to build our game.”

Igor Shesterkin made 31 saves as the host New York Rangers posted a 3-0 victory over the Winnipeg Jets on Tuesday night.

The Rangers (50-21-6, 106 points) reached 50 wins for the fifth time in team history and first time since the 2014-15 season. New York also posted its third consecutive shutout after blanking the Philadelphia Flyers and Detroit Red Wings in the last week.

New York also improved to 10-2-1 in its past 13 games and has allowed one goal or fewer seven times during that stretch. The Rangers have a shutout streak of 180 minutes, six seconds and have posted three straight shutouts for the first time since February 1973.

Shesterkin recorded his sixth shutout of the season and eighth career. He highlighted his 36th victory with a point-blank stop on Blake Wheeler’s breakaway try with about 5 1/2 minutes left.

Ryan Strome scored a power-play goal late in the second period and added an empty-netter, while defenseman Adam Fox also tallied for the Rangers. Artemi Panarin collected a pair of assists to become the second player this season to reach 70 assists and former Jet Andrew Copp also had two assists.

Shesterkin’s first big save occurred with 5:13 remaining in the first when he leaned back to stop a 60-foot slap shot from Dylan DeMelo and cover up the subsequent rebound try by Dominic Toninato. He then stopped Mason Appleton on a two-on-one early in the second

New York finally broke through when Strome cut to the front of the net, waited for a cross-ice feed from Mika Zibanejad and deflected the puck over Comrie’s right shoulder.

With about 14 minutes left in the third, Shesterkin made a chest save on Ehlers and with 8:13 remaining, Fox made it 2-0 by getting a pass from Panarin and lifting a wrist shot from between the circles over Comrie’s right shoulder.

“Bread and Copper move the puck so well,” Fox said. “It was good to get one.”

Strome sealed the deal with an empty net goal.

“It’s a credit to our goalies but we are playing good hockey,” Strome said after the game. “We are understanding what it takes to win right now.”

“It’s huge and great to see,” Gerard Gallant said about reaching 50 wins. “It’s great to have a good regular season but it’s all about the next season (playoffs).”

As the Vegas Golden Knights slide fail to make up ground in the playoff picture it looks like Jack Eichel may have to wait before make his postseason debut. Read more.