The New York Rangers inked starting goalie Igor Shesterkin to a new 4 year extension. According to Larry Brooks, this new deal is the largest for a goalie’s second contract in NHL history. Coming in at $5,666,666, it surpasses Sergei Brobrovsky’s $5.625 million deal back in 2013.

It was also revealed that Shesterkin’s deal comes with a Limited No Trade clause that will start in 2023-24. Per CapFriendly, he would be required to submit a 10 team no-trade list.

Restricted free agent goaltender Igor Shesterkin on Monday agreed to terms on a four-year contract with the New York Rangers.

Financial terms were not disclosed by the Rangers. Multiple reports say the deal is worth $22.7 million with an annual average value of $5.66 million.

Shesterkin was selected by the Rangers in the fourth round of the 2014 NHL Entry Draft. Following the selection, the Russian spent five seasons with St. Petersburg of the Kontinental Hockey League before making his NHL debut on Jan. 7, 2020.

Shesterkin is the Rangers top man in net

This past season, Igor Shesterkin made 35 appearances winning 16 of those games. He was tied for 7th in the NHL in SV% (.916), and 11th in GAA (2.62) for all goalies having played at least 25 games. When you use that same minimum games played among rookies, Shesterkin was the top backstop in SV% and ranked second in GAA to only Dallas Stars netminder Jake Oettinger (2.36).

Impressive. Especially when you consider that on March 5th he tore his groin against NJ and missed several weeks. As he was recovering from his injury, questions about his durability started to find its way into the NY papers. Larry Brooks brought up Shesterkin getting hurt in an RTP exhibition match which caused him to miss Games 1 and 2 against the Hurricanes last season. He returned for Game 3, but the Rangers were swept in the Qualifying Round.

Naturally, when he was hurt on a non contact play against the Devils red flags went up. Shesterkin responded by going on a different kind of tear upon his return. From March 24th to April 27th, Igor went 9-4-2 and had the Rangers knocking on the door of a playoff spot. He finished with a 10-7-2 record after recovering from his groin injury. Unfortunately, the Rangers missed the playoffs.

He enters this season as the clear starter for the Blueshirts. 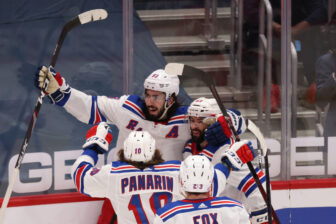