James Dolan is not going to be selling the New York Rangers or New York Knicks.

This has been speculated for years and bubbled back up in August when Jonathan Boyar of Boyar Value Group appeared on CNBC’s Closing Bell Overtime.

“We think it’s likely that after [MSG Sphere] is done, James Dolan, who controls the company, will sell the teams,” Boyar said while discussing Madison Square Garden Sports stock. “What’s interesting is that private equity has gotten involved in a big way. It wouldn’t surprise us to put a marker on one or both of the teams if private equity takes a stake.”

We were contacted by Natalie Ravitz, who is SVP Comms and Marketing at Madison Square Garden later that day after noting those comments. ”We have no plans to sell either of the teams,” she stated.

On Thursday, Barron’s published an article discussing Madison Square Gardens Sports doing a “one-time cash dividend of about $175 million, or $7 per share, and repurchase $75 million of stock in its first return of capital to shareholders since it became an independent public company in April 2020.” 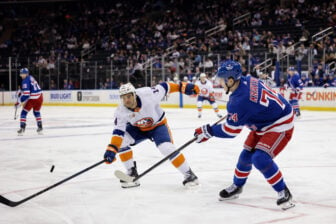