The New York Rangers preseason is over and they finished with an uninspiring 2-3-1 record. But let’s be honest, this camp wasn’t about proving themselves to anyone after last season’s run to the Eastern Conference Final. It was about getting it out of the way unscathed and ready to get back to work on winning a Stanley Cup.

For the most part, the lineup was pretty set coming into camp. There were some question marks such as who will win the third pair left defense spot, and which forward could replace what they lost in Tyler Motte on the fourth line.

The good news is that Zac Jones and Jimmy Vesey have appeared to answer those two questions. What remains unsettled is just how the Rangers will set up their lines for opening night on October 11 against the Tampa Bay Lightning.

“There’s still tough decisions to make and we’ll sit down [on Sunday] and make those decisions,” Gallant revealed. “Overall it’s been good and no one got hurt, so that’s the main thing.”

One highly likely possibility is that Kaapo Kakko has one the job as the first line right wing with Mika Zibanejad and Chris Kreider.

In his last two preseason games playing on that line, he’s scored three goals and could’ve had more.

“He had a great goal tonight and he probably should’ve had a couple more goals tonight,” Gallant said. “He’s been real good at training camp. It’s real good for that kid.”

The biggest thing I’ve noticed, aside from his maturity, is Kakko looks more confident than ever before. He doesn’t seem in awe of who he’s playing with or against and it’s resulting in more decisive play on the ice.

“No one remembers these goals once the season starts,” Kakko explained. “Still the confidence is a pretty big thing and a key for me.”

What’s even better is that Kakko has looked good with every line he’s played with. That can give Gallant flexibility to reunite the Kid line with Filip Chytil and Alexis Lafreniere anytime he wants.

“I played four games– a couple with Fil and Laffy and then Kreids and Mika,” Kakko noted on Saturday. “Today, we didn’t play the best but there’s things we can talk about.”

This summer, the 21 year-old from Turku, Finland signed a two-year deal with an AAV of $2.1 million. He’s entering his fourth NHL season and for his career, he’s amassed 58 points in 157 games.

“I’ve been working hard all summer and I’m ready to go.”

No chemistry between Trocheck and Panarin

Chemistry takes time to build and one of the biggest concerns for the New York Rangers heading into the regular-season is when Vincent Trocheck and Artemi Panarin will click.

“No, it’s not as good,” Gallant said of the chemistry between two of his top forwards. “It’s all about real games. I don’t expect them to go out there and bust their ass every shift (in preseason). Trocheck is a new player trying to find his way with our team. I’m not disappointed in anybody.”

Trocheck is replacing Ryan Strome, Panarin’s center ever since he signed with the Rangers in 2019. The two had a bond on and off the ice that will not be easily replaced.

One of the biggest issues that needs to be taken into account is Trocheck has to also learn a new system.

‘I’m glad we had these preseason games to sort things out,” Trocheck said. “I made quite a few mistakes throughout the preseason. It’s different coming into a new system and I was lost on a few plays. Nice to make those mistakes before we get to the regular season.”

Trocheck, 29, signed a 7-deal this summer for $5.625M AAV. So the Rangers need to be committed to making this work. There’s no doubt Trocheck can score with 21 goals and 51 points in 81 games last season. However, he plays a more north-south style than Panarin, who loves to go east-west.

“We’re learning a lot about each other and our tendencies,” Trocheck noted. “We had a lot of chances. Didn’t get a lot into the net. But it’s nice to get those two games with me and Bread out of the way to learn a few things about each other.”

Panarin, 30, has led the team in scoring in each of his three seasons in New York. He has 249 points in 186 career regular-season games on Broadway.

Zac Jones, 21, looks like a lock to start the season with Braden Schneider as the team’s third pair on defense. Gallant seemed pretty set on that fact also, as he never broke up the pairing to make sure they worked exclusively together.

Jones’ familiarity with Schneider dates back to their time together in Hartford before the latter was called up and stuck with the club in January.

“Last year [Schneider] and I played together a decent amount in Hartford,” Jones explained. “I thought we had chemistry, and moved well together.”

Jones led all Wolf Pack defensemen with 35 points in 52 games last season. When he was called up to New York for a spell, he notched 2 assists in 12 games. For his NHL career, he’s played 22 games with 6 points (all assists).

“I’ve got to keep improving and show why I can be an everyday NHLer,” Jones said. “I’ve just got to play my game and not worry about what I can’t control. Just be a smart puck-moving defenseman, flash my offense when it’s there, and be reliable on the backend.”

This preseason, Jones played in four games registering a goal and an assist with a +1 rating.

Kravtsov is a big kid at 6-3, 189 pounds with raw talent. Unfortunately, his decision to not play pro last season with the Wolf Pack cost him valuable development and adjustment time in North America.

This summer, he signed a one-year, one-way extension despite requesting a trade last October. The 22 year-old reported to New York early to begin preparations for the upcoming campaign and has received praise from management. More importantly, he wanted to prove to everyone what he can do.

“I’ve definitely made a lot of noise previously, so there’s this necessity to redeem myself a little bit,” he said via a translator. “I just want to do what everyone else is doing. Put in the work, get on the team, and do my part.”

In reality, all the effort in the world isn’t going to make up for lost time he could’ve developed playing in the AHL.

The problem the Rangers have is that Kravtsov is no longer exempt from waivers. If they want to send him down, they run the risk of losing their first round pick from 2018 for nothing.

With that in mind, there’s no way the Rangers are going to let someone simply claim him. They’d probably look to trade him first. Look for them to keep Kravtsov as the 13th forward and send Dryden Hunt and Julien Gauthier to the Wolf Pack, who both must pass through waivers.

Kravtsov will then have to work his way back into the lineup at practice.

One thing that stood out like a sore thumb to me in the preseason was Filip Chytil being on a mission to shoot. He finished the preseason with 20 shots on goal to lead the Rangers in that category over the course of 5 games. The only bad news is that he didn’t score a goal and ended exhibition play with just one assist.

This is a big year for the 23 year-old. The Rangers want to see him take the next step in his development as he enters his fifth full season after a 9 game stint in 2017-18.

His willingness to shoot is great sign that he may finally be relied upon to be a consistent threat as the third line center.

Chytil is in the final year of a deal that pays $2.3 per season. He will be a restricted free agent with arbitration rights in July. 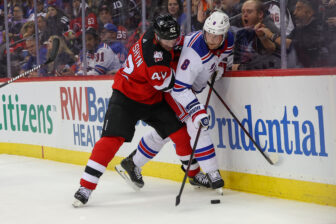