Chris Kreider scored the game-winning goal in the seventh round to cap an action-packed shootout as the New York Rangers survived blowing a late lead before recording a 4-3 victory over the visiting New Jersey Devils on Sunday night.

Kreider scored New York’s fourth goal of the shootout when he made a wide move, charged to the net and faked Devils goaltender Jonathan Bernier. Once Bernier went down, Kreider won it by lifting a backhander into the top of the net to give the Rangers their seventh straight win over the Devils.

Kreider scored after Alexander Georgiev made a pad save on Pavel Zacha’s attempt in the top of the seventh.

Kaapo Kakko breaks through in a big way

Kaapo Kakko scored the first New York goal in the shootout after he finished off a give-and-go with Ryan Strome to give the Rangers a 3-2 lead 6:29 into the third. The teams needed overtime after Zacha scored on a rebound with 2:44 left in regulation.

“It feels good,” Kakko said via NHL.com. “A big win always feels good. I got huge chances last game, so I knew it’s going to come, and today was the day. The first goal is sometimes the hardest after 10 games.”

After the game, head coach Gerard Gallant raved about the 20-year old, who was selected 2nd overall in the 2019 NHL Draft.

“The kid played great tonight. He looked like a beast,” Gallant said.

Kakko’s goal showed incredible patience and poise for a player who has been snake-bit this season. It was the power + finesse move that people have been begging to see. Now that the seal is broken, it’s likely more points are coming.

Bratt and Hamilton scored in regulation before Zacha tied the game as the Devils dropped their second straight. Adam Fox and Alexis Lafreniere scored in the first two periods for the Rangers.

Georgiev made 24 saves in his fourth start of the season and first since allowing six goals at Edmonton Nov. 5. He also gave the Rangers a chance to eventually win with a diving skate on Tomas Tatar in the sixth round.

Artemi Panarin and Strome also scored in the shootout for the Rangers while Jesper Bratt, Dougie Hamilton and Andreas Johnsson scored in the skills competition for New Jersey.

New Jersey goaltender MacKenzie Blackwood stopped 30 shots before appearing to get injured trying to stop Kakko’s goal. Bernier made eight saves before losing the game in the shootout.

Kreider, 30, has been red-hot this season with 12 goals in 15 games. Oddly enough, in his entire 10 year career (all with the Rangers), he’s taken just one shootout attempt and missed.

“To be honest with you, he was hiding at the end of the bench,” Gallant revealed. “‘Kreids’ is great. He’s a confident player right now.”

After the goal, Kreider could not help himself and mocked PK Subban, who injured Sammy Blais with another possible slew foot. The wily veteran went down to one knee and slid across the ice in front of the Devils’ bench before releasing a fist pump. Exactly mimicking Subban’s patented celly. 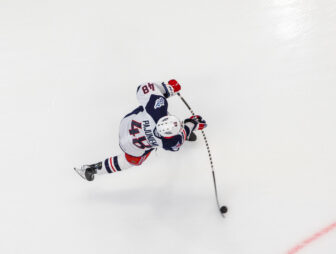