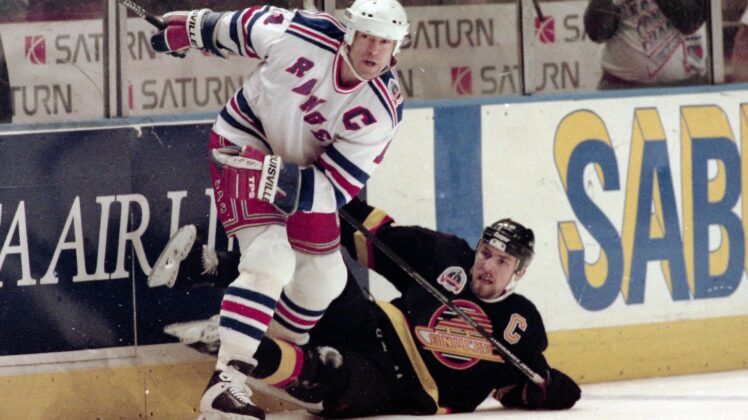 Rangers Mark Messier (11) comes away from a check to Vancouver’s Trevor Linden (16) during game 7 of the Stanley Cup finals at Madison Square Garden June 14, 1994. The Rangers won the game 3-2 and the Stanley Cup. Credit: © Frank Becerra Jr./The Journal News

When it comes to winning, Mark Messier knows a thing or two about the subject after leading his teams to six Stanley Cup titles. He also understands winning in New York, as he captained the Rangers to their first Stanley Cup in 1994 to end a 54 year curse.

“When I first got to New York the team would have rather not talked about expectations and winning the Stanley Cup. It was easier not to talk about it and get fans disappointed and have to deal with losing and then the aftermath of losing,” Messier said. “That had to change in New York, and of course with that brings added pressure and expectations and decisions that have to be made in order to get you there. Obviously it was one of the reasons why we were able to eventually win in New York.”

So when Messier talks about the Rangers, ears should be set to listen mode.

Rangers Legend and Hockey Hall of Fame center, Mark Messier was all smiles at his youth hockey camp.

“We’re so excited to be back,” Messier said to Erik Dobratz of WTNH News in Connecticut. “To see the kids back at that rink and having a good time…Covid took a bite out of all us.”

Messier also talked about this past season and what the future holds for the Blueshirts.

“I think it was an incredible season for the Rangers,” Messier acknowledged. “They made a lot of changes again this year. You never know how the chemistry is going to develop.”

The last captain of the franchise to win a championship is talking about adding Vincent Trocheck, but also losing all their UFAs this offseason. Still, Messier sees the Rangers are in great shape.

“They’ve got some superstars on their team, obviously starting with [Shesterkin], and Fox, and Kreider had an amazing year,” he noted. “They’ve got some strong pieces to build around. We’re all hoping they can get back to where they were and take the next step.”

The Rangers played 20 playoff games in 40 days and it took a toll on the team. After going up 2-0 in against the Tampa Bay Lightning, they fizzled out to lose the series in six games.

“You get to the Conference Final and you realize you have a whole other month of hockey to play. So psychologically that’s not easy for players that haven’ been there before,” Messier explained. “The whole team grew a lot because of that experience and they’ll be a whole lot stronger towards the end of next year.”

I reached out to Erik about the interview to see if there were any other tidbits that didn’t make the cut. He relayed that Messier, who is 61 years young, joked about being on his feet all day with the kids.

“Thank god for the better equipment,” Messier quipped. “Skates are more comfortable than back in the day.”

You can check out the video interview below.