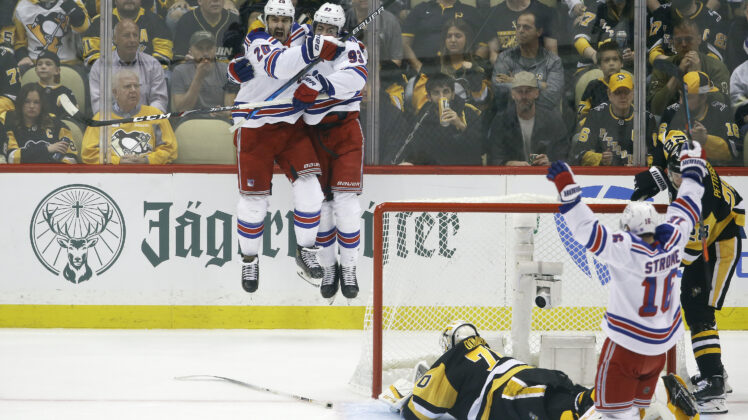 The New York Rangers have clawed all the way back from a 3-1 series deficit to force a dramatic Game 7 against the Pittsburgh Penguins.

On Sunday night, the Blueshirts will host the Penguins at Madison Square Garden in one final game to decide who advances to Round 2 thanks to a superstar effort from Mika Zibanejad.

“We’ve got 20 something comeback wins this year,” said Adam Fox, who picked up 4 assists. “We’ve been saying No Quit New York all year, just a great effort by everyone. It was nice to get the win.”

The Penguins played without captain Sidney Crosby due to a collision with Rangers defenseman Jacob Trouba in Game 5. Early in this contest, Brian Boyle tried to nail Trouba but took the worst of it and left the game with an injury of his own.

Jeff Carter put the Penguins on the board at 14:12 of the first as he buried a Kasperi Kapanen’s sharp-angle shot.

Just 96 seconds later, Bryan Rust blew a one-timer over Igor Shesterkin’s blocker to build the lead to 2-0. This sent the Penguins’ fans into a frenzy and raining chants of “EEE-GOR, EEE-GOR” down on the Vezina and Hart nominee.

However, in the second period the Rangers rallied with three straight goals.

The Rangers would get their first power play at the 5 minute mark when Evan Rodrigues roughed up Ryan Lindgren. Five seconds later, Mika Zibanejad hammered one home to make it 2-1.

Then just 76 seconds after he lit the lamp, Mika blasted a one-timer by a screened Louis Domingue to knot it up at 2.

“It’s a good feeling,” Zibanejad said after the win. “We show no quit and that’s what I love about this team.”

The Rangers broke the tie with an amazing outlet pass by Igor Shesterkin to Zibanejad. Domingue got his glove on Zibanejad’s shot but couldn’t hold on allowing Chris Kreider to beat his man, defenseman Marcus Pettersson and slam the rebound home at 13:48 of the second.

Malkin tied it 3-3 with less than 5 minutes left in the period to set up a dramatic final frame.

The third period was intense as both teams were playing it tight.

Pittsburgh had the early advantage in play as the Rangers struggled at times to break out of their zone cleanly.

Chris Kreider would break the tie with just 1:28 left in the game by simply taking a shot. What should’ve been a routine save was made harder by Zibanejad moving by Domingue. The puck would pop hit his blocker and pop over his head before going into the back of the net.

“Good coaches, good young guys, good vets, a good room,” Kreider said. “I’m proud of the way this team competes whether we are down or up.”

Andrew Copp would ensure a Game 7 as he buried an empty-net goal after Kevin Rooney made a strong play along the boards.

“Three days ago we were down 3-1 and now we’ve got a chance to go home and win a Game 7,” Gerard Gallant said. “The last two games were battles we had to win hard and nothing is going to change. Winner goes on and the loser goes home– it’s going to be a great game.”