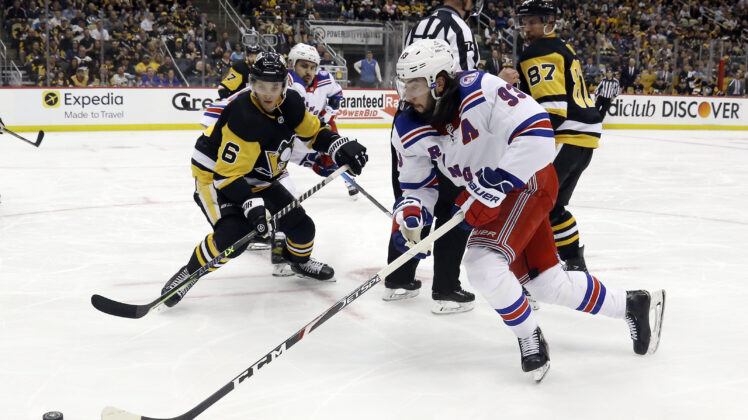 Mika Zibanejad has been extremely quiet in this series to date. Despite being a point-a-game player during the regular season, he’s mustered only 4 points (all assists) in 5 playoff games.

With the Pittsburgh Penguins playing without Sidney Crosby, it’s well past time that the New York Rangers #1 center find that Mika-Magic that earned him an 8 year contract extension worth $8.5M per season.

No longer having the burden of matching up against Crosby, the Rangers need him more than ever to assert himself.

There’s simply no denying that the Crosby line was absolutely destroying Zibanejad’s unit every time they were on the ice.

Crosby, who will not play in Game 6, has 9 points in this series. His line mates Bryan Rust has 6 points and Jake Guentzel has 8, which includes 7 goals.

“I think we haven’t created enough offense,” Zibanejad said of his line. “We are a little too worried about the line we are playing against. Overall we are trying to work through it. It’s not an easy opponent and we are trying to play our game.”

Whether or not Mika will admit it or not, at least the line matchup has gotten a little easier without Crosby.

This does not mean that the Rangers first line can take a night off on defense, but sans one of the game’s best offensive players in the last decade, they are less likely to be burned by some unbelievable setups.

Make them worry about you

It was an incredible season for the 29 year-old Zibanejad.

In 81 contests, Mika set a career-high in points with 81. He also helped Chris Kreider unlock his goal scoring potential to the tune of 52, including 26 power play markers. Trade deadline acquisition Frank Vatrano has also fit in perfectly as a shoot-first ask questions later winger.

“We still need to play our game and do the things we did all year,” Mika acknowledged heading into Game 6. “That’s something I try to keep reminding myself to play my game and worry about what we do on the ice.”

And that’s the mission as soon as they take their first shift– make the Penguins worry about them.

All three players can skate, so there’s no excuse not to come back deep in the defensive zone and exit it cleanly. They should still be able generate enough speed out of their zone to be a threat without leaving Igor Shesterkin and the defensemen out to dry.

“I enjoy the challenge and the intensity of the playoffs,” Zibanejad added.

Well the challenge is to get this series back to the Garden for Game 7 and it’s time for Mika to lead the way.

Also Read:
Jacob Trouba ready to be Public Enemy 1 for Rangers in Pittsburgh