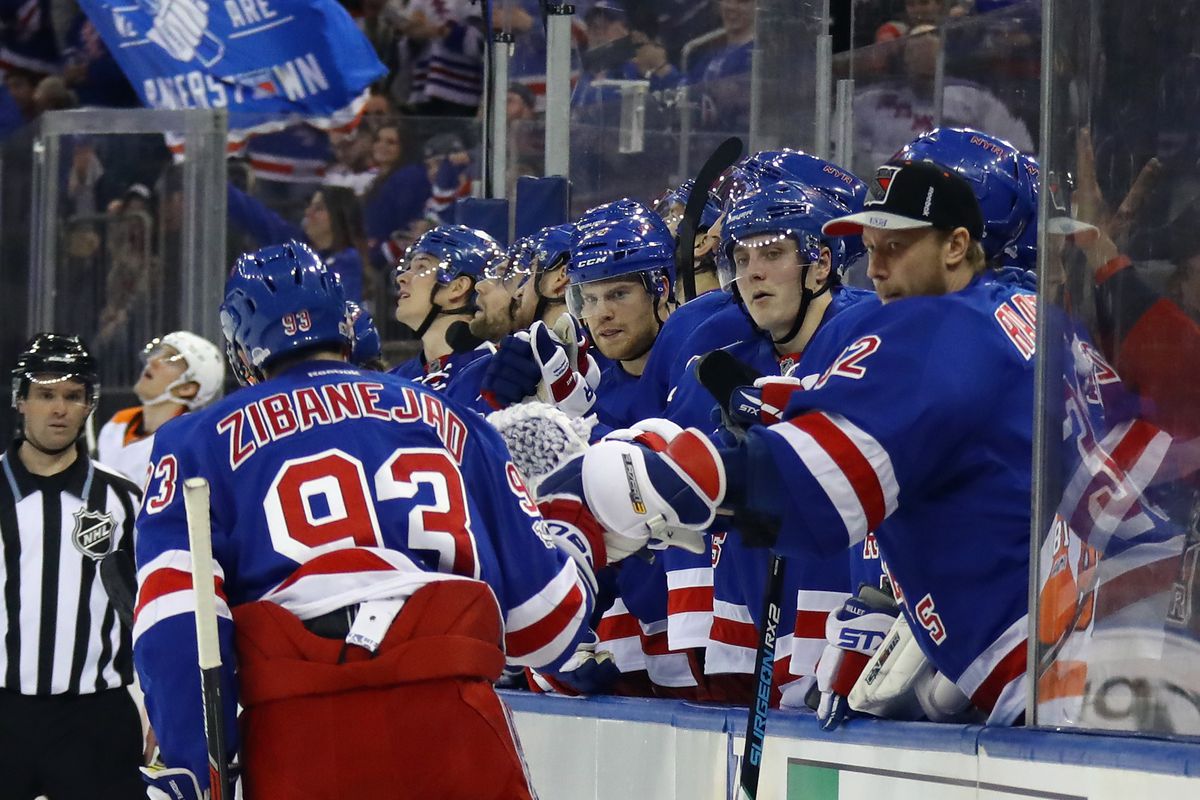 Since the day Mark Messier left the New York Rangers, it seems this organization has done everything they could to find that elusive number one center. If you want to win a Stanley Cup in the National Hockey League you need to have a dominant center who can score, play a solid game on both ends of the ice and make those around him better. Chris Drury, Scott Gomez, Brad Richards, Bobby Holik; the names go on but none of them ever seemed to be that dominant force that the Rangers hoped for. Well folks, we (might) finally have found our number one center in the form of 24-year-old Mika Zibanejad.

Zibanejad had a decent first season in New York and was really finding his groove before an injury took him out for a large part of the season. He put up respectable numbers scoring 14 times and assisting on 23 others in 56 games. Those numbers are great but fans expected more and in the playoffs is when we began to see what kind of impact this guy could really have.

In the playoffs, he led all Rangers in scoring with two goals and seven assists in 12 games. He also scored one of the biggest Rangers goals in the past few seasons, when he scored on Carey Price in overtime to win game five in the first round against the Montreal Canadiens.

He was awarded this past summer with a five-year deal worth 5.35 million a season. Management and fans were no doubt expecting big things from the Swedish center this season and so far he’s proving that he was worth that deal and more.

First things first, you can’t teach size. Zibanejad is six 6’2″ and weighs about 227 pounds. He won’t get outmuscled for pucks and he can use his big frame to his advantage. Looking at some of the top centers in the league, you notice that a lot of them have size on their side including Ryan Johansen of the Nashville Predators, Ryan Getzlaf of the Anaheim Ducks and Anze Kopitar of the Los Angeles Kings.

Next is chemistry. For any center, let alone a team’s number one center, to succeed in the NHL, they need to develop chemistry with a set of wingers on their team. In Zibanejad’s case, he has found it with Chris Kreider and Pavel Buchnevich. The trio, known to fans as the KZB line, showed flashes of what they could together last year but injuries and depth issues forced them apart. This year, with all three healthy and put back together, they are showing just how good they can be. The chemistry between these three players is something great to watch and you can tell they know where the other will be without looking. Rangers commentator Joe Micheletti has commented in recent days on air that the trio is constantly communicating, even on the bench in between shifts.

Kreider is the big bodied power forward with great size and speed. Buchnevich is the slick sniper who has a nose for the net. Zibanejad is the setup man with the slick hands. It’s important to note that Zibanejad also has a booming shot. A number one center needs his wingers and Zibanejad has found them in those two. So he’s got the size, he’s found the right chemistry with his wingers but what else is he doing right that’s making his trajectory point up? That’s simple: Consistency.

A knock on Zibanejad earlier in his career, and even when he first got to New York, was his consistency. Some nights he would look like the dominant number one center the Ottawa Senators thought they drafted, and other nights he would be invisible. The Rangers must’ve seen something that Ottawa didn’t after Gorton traded Derick Brassard to the Senators in exchange for Zibanejad. It’s clear that Gorton’s move is paying off because Zibanejad is beginning to show the consistency he lacked earlier in his career.

With 22 points in 23 games so far this season, Zibanejad has been noticeable, consistent and has been a driving force in the Rangers offense. Zibanejad, along with Kevin Shattenkirk and Buchnevich, has really made a huge impact on the powerplay that even when they don’t score, they generate chances and don’t cause momentum to go the other way. Zibanejad leads the Rangers in goals (11), is third in assists (11) and leads the team in points. At this pace, which he will hopefully sustain, we are looking at something like a 70-80 point season from Zibanejad and that would further solidify his status as the number one center on Broadway.

His youth is also an aspect here as the Rangers in previous seasons signed guys who were beginning to push the wrong side of 30. The trade of Brassard for Zibanejad not only gave them a more talented player but one who is much younger and the Rangers and can build around for years to come. It cannot be stated enough that the Rangers actually got younger with this acquisition as opposed to older because this time they have hit a player on the upswing instead of the downswing.

So he’s got the size, he’s found the right chemistry, he’s finding his consistency and he’s young and on the upswing of his career. Am I missing anything here? Oh yes, that’s right. The clutch gene.

Some of Zibanejad’s most memorable goals and plays with the team so far have been of the overtime winning variety or game-tying variety. He seems to have a knack for big moments and you need a player that can spark his team at the right time or give the other team a knockout blow. In 2012, Zibanejad ended Sweden’s world junior championship gold medal drought with a massive goal.

He also has a Senators franchise record (fastest hat-trick in their history) Check this one out:\

Size. Chemistry. Slick Hands. Speed. Skill. Consistency. We’re now seeing Mika Zibanejad blossom into the player that many members of the hockey world always thought he could be. We just might have found our first true number one center since Mark Messier.