Neil Smith remains the only General Manager in the last 82 years to win a Stanley Cup with the New York Rangers.

When he joined the organization in 1989, the team already had future stars in Brian Leetch and Mike Richter, but he knew they needed much more. Neil’s early drafting yielded results with players like Doug Weight and three key Russian stars in Sergei Nemchinov, Sergei Zubov, and Alexei Kovalev. All those players would in one way or another play huge roles in winning the 1994 Stanley Cup. However, Neil also wanted results quickly and went after it via trades.

Smith earned the nickname ‘Big Deal Neil’ for his ability to bring in huge names to New York. It began in January of 1990 when he packaged Tomas Sandstrom and Tony Granato to the L.A. Kings for Bernie Nicholls. That same season, he brought in Mike Gartner for Ulf Dahlen.

Neil put the league on notice that he was ready to do whatever he could to end the franchise’s Stanley Cup misery.

Before the 1991 season, Smith started a string of brilliant moves that eventually led the team to the promised land. By signing Adam Graves and only giving away Troy Mallette as compensation it set the stage for his biggest transaction of his career.

On October 4th, 1991 in what is still the greatest trade in Rangers history, Smith landed 5-time Cup winner Mark Messier and future consideration for Nicholls, Louie DeBrusk and Steven Rice. That consideration turned out to be Jeff Beukeboom, who partnered with Leetch to form the Rangers top defensive pair for years.

Upon his arrival, Messier was immediately named the Captain and Smith prophetically said: “The Rangers logo will look a little different after Mark is done here.”

He couldn’t have been more right, but have you ever wondered about the trades that almost happened?

Neil Smith spoke with me in a candid interview to give me an inside look at his time as Rangers GM.

It was the summer of 1992 and the Quebec Nordiques were forced to trade the first overall pick of the 1991 Draft. Eric Lindros made it clear that he would never play for the team prior to the selection, but the Nords took him anyway.

The deal became one of the most infamous in NHL history as the Nordiques traded him to two different teams. Both the Philadelphia Flyers and New York Rangers thought they had a done deal for Lindros, who was considered the most talented prospect since Wayne Gretzky at that time.

Ultimately, an arbitrator ruled the verbal agreement with the Flyers that took place before the Rangers deal was good enough to constitute a trade.

Since that fateful day on June 30, 1992, speculation as to whom was involved in the trade from the Rangers has persisted.

After 30 years, Kevin Kurz of The Athletic tweeted out a document from Jay Snider, son of former Flyers owner Ed Snider that revealed the exact names.

I asked Neil, since the document did not appear to be the final trade proposal sent to the NHL if that was accurate.

“That document is pretty accurate,” he said. “What was going to happen with Vanbiesbrouck if he declared himself a free agent, Quebec was going to get James Patrick instead.”

Looking back, Smith still wanted to get Lindros but pointed out how all the names listed in the trade turned out to play a role in winning the Cup in ’94.

Vanbiesbrouck became Doug Lidster, who was on the ice when the buzzer sounded in Game 7 against the Vancouver Canucks.

“Tony Amonte, which I think of all the trades was the worst one, but without Noonan and Matteau we don’t win the Cup,” Smith admitted. “If you look at that, I think there goes your Stanley Cup if that trade had happened. Are there more Cups after that? No one knows.”

Neil Smith had a done deal for Adam Oates

Before losing out on Lindros and despite having Mark Messier in the fold, Smith was still looking for ways to improve the team.

When I asked Neil if there was big trade that almost happened he immediately put forth the name Adam Oates.

On February 7, 1992 the St. Louis Blues traded Oates to the Boston Bruins for Craig Janney and Stephane Quintal. What no one knew is that the New York Rangers had a deal in place for the future Hall-of-Fame player before he went to Beantown.

“Roger Neilsen was still coaching at the time,” he began. “Ron Caron [GM of the Blues] calls me and says, ‘Are you interested in Adam Oates?'”

Smith recalled immediately saying yes because he recruited him for Detroit in 1986. I mean, why wouldn’t you? The 28 year-old center already had two 100 point seasons under his belt and was heading for 99 points during the 1991-92 campaign.

“Here’s the deal we had, it was Adam Oates and Paul Cavallini for Darren Turcotte and James Patrick,” Smith revealed. “That deal was done. Ron said ‘okay’, but I told him that I wasn’t going to do it without running it by my coach.”

Smith admits that being very young at the time and with Neilsen having much more experience, he didn’t feel right about making the trade without his approval. It turned out that Neilsen, who absolutely loved Turcotte, wasn’t crazy about it and in essence nixed the deal.

“I called Ronnie back to tell him I can’t do it and he was pissed off,” Smith said. “That trade is the best trade I didn’t make, meaning I blew it by not making it. But at the time, I wasn’t going to make a deal like that without the coach buying in.”

Of course, Smith reminded me that Turcotte and Patrick brought in Steve Larmer. Another big 1994 trade acquisition who was also on the ice for the final buzzer.

In the end, Oates went on to score 1,420 points in 1,337 games. Smith lamented not making the deal, but when the end result would be Stanley Cup a few seasons later it made it easier to digest.

About that Mark Messier for Brett Hull trade?

Whenever we talk about big trades that almost happened regarding the New York Rangers, one that almost always comes up is Mark Messier for Brett Hull.

Apparently, a rumor surfaced while Messier was embroiled in heated contract talks with the Rangers during the 1994-95 season of a one-for-one trade involving the Blues sniper.

Hull was apparently not happy with new coach Mike Keenan and wanted out.

When I asked if there was any truth to it, Smith told me unequivocally that no discussion ever happened.

“I did not discuss trading Messier ever to anybody,” he said.

Note: I want to thank Neil Smith for generously giving his time and providing such great insights. The interview went well over the intended 30 minutes and I will have more stories to share with you this week. 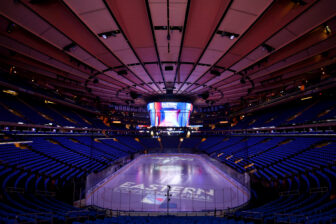