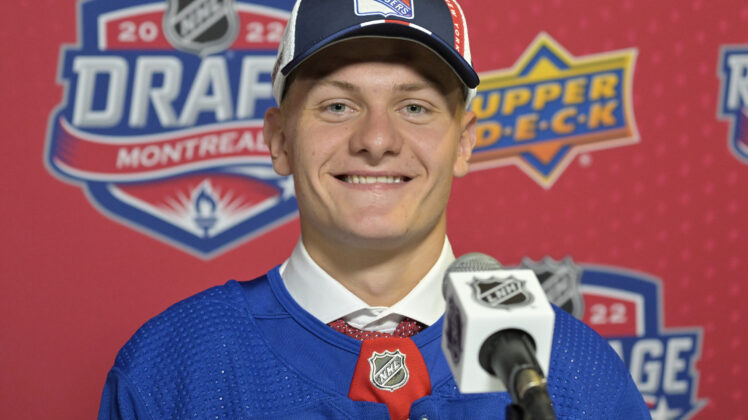 Jul 8, 2022; Montreal, Quebec, CANADA; Adam Sykora gives an interview after being selected by the New York Rangers in the second round of the 2022 NHL Draft at the Bell Centre. Mandatory Credit: Eric Bolte-USA TODAY Sports

The New York Rangers have completed the 2022 NHL Draft with six selections on Friday in Montreal. Chris Drury and his scouting staff selected three centers, two wingers, and a defenseman with their picks.

Adam Sykora was the first player taken in the second round and made quite the impression when talking with the media. From the moment he sat in front of the microphone, he had a smile from ear-to-ear thrilled to be chosen by the Rangers.

When asked about a player he likes or models his game after the response was quick.

“I really like Brad Marchand because he’s like a rat and he’s not scared of [bigger players],” Sykora laughed. “I try to play that way.”

Sykora, 17, recorded 10 goals and 17 points in 46 games with Nitra. He added two goals in five games for Slovakia at the 2021-22 Hlinka Gretzky Cup. He describes himself as a high-energy player that loves to get under the skin of his opponents. A relentless forechecker with good speed and some scoring ability.

“I try to play physical,” he said. I’m a hard-working player with a lot of energy and give a lot of hits.”

Round 3, 97th overall (via Alexandar Georgiev trade with Colorado)

McConnell-Barker, 18, picked up 23 goals and 49 points in 68 games in the OHL. He added another 5 points in 10 playoff contests. The Rangers get a big kid who plays both sides of the puck well and looks at Patrice Bergeron as a model for his game.

“I’m a two-way centerman and I work really hard all over the ice,” he said. “I am good defensively but I can produce offensively by putting the puck in the net and making some plays too.”

Round 4, 111th overall (via Brett Howden trade with Vegas)

Laba, 18, is committed to play at Colgate University after registering 39 points in 50 games with the Lincoln Stars of the USHL. The scouting reports have him as a power-forward that’s difficult to play against.

Update: Per Mollie Walker of the NY Post, Laba has uncommitted from Colgate and will now attend Colorado College.

Mancini, 20, played 38 games in the NCAA picking up 5 points and also spent time with Frolunda in Sweden.

“He’s a player that when I was in Toronto we watched and liked,” Director of Scouting John Lilley said. “He’s a good defensive minded player that’s big. A high character young man.”

Round 5, 161st overall (via Alexandar Georgiev trade with Colorado)

Barbashev, 18, is the younger brother of the Blues’ Ivan Barbashev. This past season, he notched 42 points in 59 games with the Wildcats. The Rangers are getting another physical winger that can score gritty goals.

“It’s my brother because we play the same hockey,” Maxim answered a question on who he models his game after. “I am physical player that’s strong on the puck.”

Karpa, 20, is the son of former Ranger Dave Karpa. This past season he registered 12 points in 33 contests. If you haven’t sensed the trend yet, Karpa is a physical forward that isn’t afraid to mix it up.