The New York Rangers currently have just four picks in the upcoming NHL Draft which begins with first round selections on Thursday, July, 7th at 7 PM.

While the Blueshirts have no first round pick in this year’s draft thanks to the conditions of the Andrew Copp trade, they will have selections in the following rounds on Friday, July 8th starting at 11 AM:

One area the Rangers need to address for their prospect pool is their center position. At this moment it’s fairly barren with only Ryder Korczak and Karl Henriksson having legitimate shots to make the NHL in the future.

The Rangers may be able to pick up another pick or two depending on trades they might make. That being said, they could have less if it’s going to take a second round pick attached to Patrik Nemeth to remove his entire $2.5M cap hit for the next two seasons.

For now, we will assume they will make their second round selection at 63rd overall. Which centers are out there in that range they could target?

Corey Pronman of The Athletic has Fraser Minten of the Kamloops Blazers ranked 63rd. The center is a teammate of highly-touted goalie prospect Dylan Garand, who won CHL Goalie of the Year.

Minten, 17, is a two-way center with decent size at 6-1, 185 lbs. His shot and solid playmaking abilities are what has him regarded a strong draft pick. The left-handed forward has real NHL potential if he works on his skating.

This past season, he recorded 20 goals and 55 points in 67 regular-season games. He followed that up with 16 points in 17 playoffs contests.

Scott Wheeler of The Athletic has center Paul Ludwinski of the Kingston Frontenacs ranked 63rd.

Ludwinski, 18, is a little on the smaller side at 5-11, 183 lbs. Although the scouting report doesn’t scream “draft me”, he’s considered a character guy with a high compete level. The projections for the lefty pivot are as a third or fourth line player.

Last year, he picked up 16 goals and 43 points in 67 games. Ludwinski then added 12 points in 11 playoffs matches which speaks to his competitiveness.

When it comes to draft experts, Bob McKenzie of TSN is widely considered one of the best. In his final rankings he has Finnish center Topi Ronni ranked 65th.

Ronni, 18, is a bigger center at 6-2, 181 lbs and similar to Kaapo Kakko regarding his strength on the puck. He’s considered a solid playmaker with good upside. His biggest knock from scouting reports is his skating which is considered to be average.

This past season, Ronni opened eyes on the international stage picking up 4 points in 6 games at the WJC, and 6 points in 5 contests at the Hlinka Gretzky Cup.

Analysis and who the Rangers should take

Here’s how all three prospects are ranked per the draft experts cited:

As you can tell, these ranking are extremely subjective depending on the analyst. Fraser Minten actually has the most disparity as to where he should rank among those three.

Another draft guru, TSN’s Craig Button ranks Ronni at 84, Minten at 85, and Ludwinski all the way down to 94. Basically, who the Rangers may select is anyone’s guess. Chris Drury is also more likely to still draft the best player available in round two, and if that’s another right handed defenseman– so be it.

However, the Rangers really need a center that has a chance to play in the top six, which narrows it down to either Minten or Ronni. If Kakko is indeed a part of this team’s future than I’d go with Ronni.

Regardless, should the Rangers not take a center with their first pick in this year’s draft, they will most certainly do so in rounds 4 and/or 5. 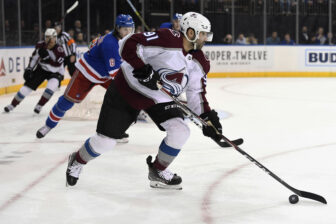 Editor’s Note: To everyone, thank you all for the reading Forever Blueshirts and have a safe Fourth of July!