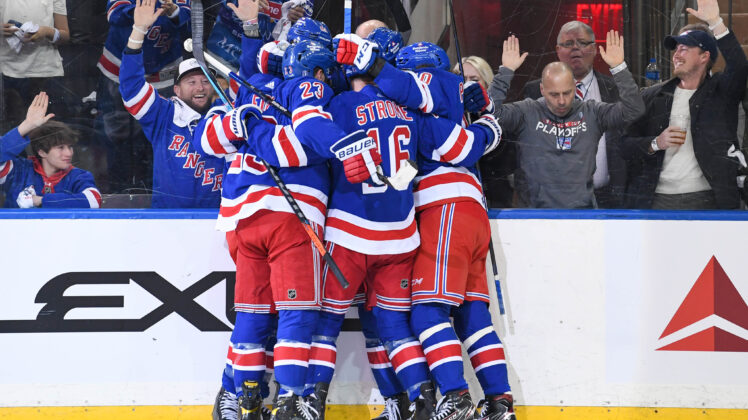 May 5, 2022; New York, New York, USA; New York Rangers celebrates the goal by center Andrew Copp (18) against the Pittsburgh Penguins during the first period in game two of the first round of the 2022 Stanley Cup Playoffs at Madison Square Garden. Mandatory Credit: Dennis Schneidler-USA TODAY Sports

The New York Rangers will be looking to make a little history if they can complete the comeback in Game 7 against the Pittsburgh Penguins on Sunday.

If the Rangers can complete the feat tonight at Madison Square Garden they will tie the Vancouver Canucks and Montreal Canadiens for most comebacks at three. They would also have the distinction of doing it in the least amount of time.

In 1942, the Toronto Maple Leafs came all the way back from a 3-0 series deficit to defeat the Detroit Red Wings in the Stanley Cup Final. It was the first comeback of its kind and would not be duplicated until 1975 with the New York Islanders defeated the Pittsburgh Penguins in the Quarter Finals down 3-0 as well.

The Islanders did it again in 1987 to the Washington Capitals becoming the first official team to overcome a 3-1 deficit.

The Vancouver Canucks, who are tied with the most playoff series comebacks did it three times over the span of 11 seasons. First it was in 1992 against the Winnipeg Jets, followed by the Calgary Flames in 1994 (eventually lost to the Rangers in the Stanley Cup Final), and capped with the St. Louis Blues in 2003.

Montreal is the last team to overcome a 3-1 deficit by beating the Toronto Maple Leafs last season. They rode that momentum to the Stanley Cup Final before losing to the Tampa Bay Lightning. The Habs first did it in 2004 against the Boston Bruins and then 2010 versus the Washington Capitals.

As a side note, the Capitals have the most 3-1 series comebacks against at 5.

The New York Rangers first pulled off the 3-1 comeback back in 2014 against the Pittsburgh Penguins during the second round.

It was a memorable and emotional comeback which was heightened by Marty St. Louis losing his mom before Game 5. He stoically continued to play at the behest of his father, who told his son that his mother would want him to play.

St. Louis would further add to the dramatic story by opening the scoring in Game 6 on Mother’s Day.

The Rangers won the series in Pittsburgh thanks to a Herculean effort by Henrik Lundqvist stopping 35 of 36 shots. New York would ride that momentum to the Stanley Cup Final before falling to the Los Angeles Kings.

New York would accomplish the feat again in 2015 versus the Washington Capitals. It was another second round series win backstopped by another sterling Game 7 performance from Lundqvist saving 35 of 36 shots. Derek Stepan would score the OT winner but the Rangers would fall to the Tampa Lightning in 7 in the Conference Final.

If the Rangers can pull off the comeback Sunday night, they will tie the record at 3 comeback wins but will have done so in the shortest period of time at 8 seasons. 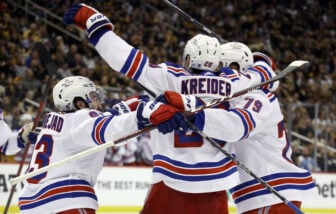 The Pittsburgh Penguins have failed to close out the New York Rangers in Games 5 and 6. They lost center Sidney Crosby midway through Game 5 after a collision with Rangers defender Jacob Trouba and goalie Tristan Jarry has been out since April 14 nursing a foot injury.

On Saturday, the Penguins rejoiced when their captain stepped on the ice for practice raising hopes he could be a possibility to play in Game 7 on Sunday at Madison Square Garden.