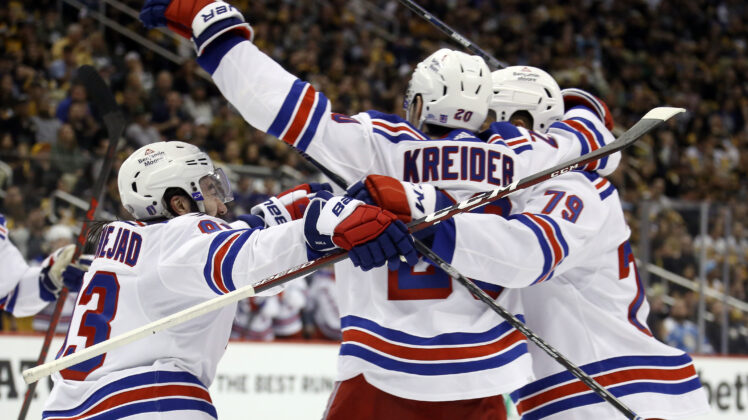 May 13, 2022; Pittsburgh, Pennsylvania, USA; The New York Rangers celebrate the game winning goal scored by Rangers left wing Chris Kreider (20) against the Pittsburgh Penguins during the third period in game six of the first round of the 2022 Stanley Cup Playoffs at PPG Paints Arena. The Rangers won 5-3. Mandatory Credit: Charles LeClaire-USA TODAY Sports

The New York Rangers picked up 27 comeback wins during a season that saw them post a 52-24-6 for 110 points. Their No Quit in New York mantra has been more than just some marketing slogan in these playoffs as they’ve come back in both Games 5 and 6 from 2-0 down to win those contests.

In doing so, the Blueshirts also climbed out of a 3-1 series hole to even things up and set the stage for a dramatic Game 7 Sunday night at Madison Square Garden.

“We’ve got 20 something comeback wins this year,” said Adam Fox, who has 9 points in the series. “We’ve been saying No Quit New York all year, just a great effort by everyone. It was nice to get the win.”

These resilient Rangers worked hard all year to get home-ice in the first round of the Stanley Cup playoffs and a Game 7 at the Garden. They’ve shown an ability to battle back and a belief in each other that shouldn’t surprise anyone that’s followed this team closely.

“We’ve been able to come together as a team through hard times over the course of the year, over the course of the last couple years,” Chris Kreider, who scored twice in Game 6 said. “I think it’s been a long time coming for us. Regardless of the situation, I’m proud of the way this team competes. Whether we’re down, whether we’re up, trying to get to our game, trying to play the same way.”

If the Blueshirts can complete the comeback from down 3-1 it will be the third time in their history that they’ve done so. The last time was against the Washington Capitals in 2015 where they made it to the Eastern Conference Final.

The Pittsburgh Penguins are well aware of the first time the Rangers completed the feat as it was against them in 2014. New York would ride that wave all the way to the Stanley Cup Final before falling to the Los Angeles Kings in 5.

“Game 7 is huge for us and now we need to make sure to finish it off tomorrow playing the right way,” Gerard Gallant said on Saturday. “We gave ourselves an opportunity and worked hard to get back. I think everyone is really excited. It’s a big game for sure and it’ll be a lot of fun.”

Penguins may have Sidney Crosby for Game 7

On Saturday, the Penguins rejoiced when their captain Sidney Crosby stepped on the ice for practice raising hopes he could be a possibility to play in Game 7 on Sunday at Madison Square Garden.

Crosby was injured with a reported concussion after colliding with Rangers defenseman Jacob Trouba in Game 5.

Number 1 goalie Tristan Jarry, who has not played since April 14 with a foot injury also practiced in full.

“We’ll take each day as it comes,” head coach Mike Sullivan said. “I’m not going speculate at this point. They’re obviously on the ice. At this point, that’s encouraging. They’re making progress.”

The Penguins have a large list of wounded players with the status of many players as day-to-day. Whether or not any of them can go tomorrow remains to be seen, but multiple reports suggested that Crosby and Jarry looked ready for action.

Rickard Rakell (upper-body) and Brian Dumoulin (lower-body) are possible with the former looking more likely to go. Brian Boyle, who was injured on an attempted hit in the first period is still being evaluated.

Whether Crosby, Jarry, or any of the other injured Penguins can play the Penguins are not going to just roll over.

“Nobody said it was going to be easy,” Penguins defenseman Kris Letang said. “They’re a really good team. They have a lot of skilled players that can score goals. It’s a race to four and we have to regroup, stay positive and get the job done.”