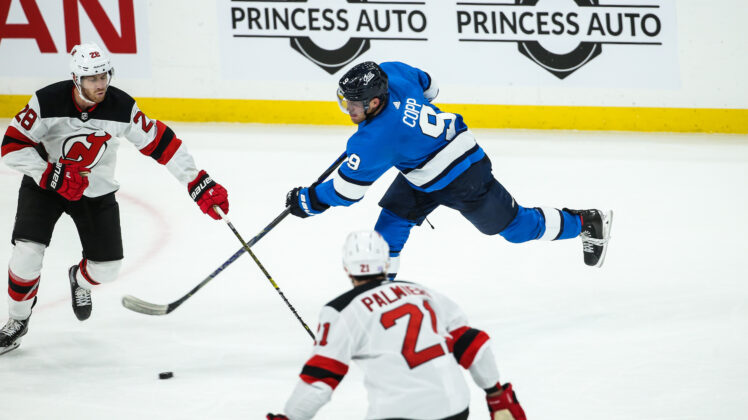 The New York Rangers hope to have all their new additions in the lineup on Tuesday night against rival New Jersey Devils.

“Excited with what we were able to do and get the players we were able to get, and excited to see them play hopefully as soon as tomorrow,” President and General Manager Chris Drury said after the deadline passed.

Four goals turned out to be enough for the New York Rangers to complete a successful weekend against two of the elite teams in the Eastern Conference. It also made capturing the Metropolitan Division more of a possibility.

The Rangers will continue their quest for first place Tuesday night in Newark, N.J., when they visit the New Jersey Devils.

The Rangers head to New Jersey after sweeping a back-to-back set with the Tampa Bay Lightning and Carolina Hurricanes. After Mika Zibanejad scored the tiebreaking power-play goal with 16 seconds left in Saturday’s 2-1 win at Tampa Bay, the Rangers followed it up with an impressive 2-0 win at Carolina on Sunday.

Chris Kreider scored his 41st goal and backup Alexandar Georgiev made 44 saves in a game where the Rangers mustered only 17 shots on goal. It was enough to hike New York’s point total to 85, tying them with the Pittsburgh Penguins and pulling to within three of the Hurricanes.

“We were lucky,” coach Gerard Gallant said. “We were a tired hockey team. They were all over us. They dominated, but we found a way to get two points.”

The Rangers own 40 wins, one fewer than Carolina, which has a game in hand and is hosting Tampa Bay Tuesday. Pittsburgh owns 38 wins and has a back-to-back with the Columbus Blue Jackets and Buffalo Sabres before visiting the Rangers on Friday.

Escaping Carolina with two points gave New York its fourth win in five games (4-1-0) since getting outscored 11-4 in consecutive lopsided losses at Minnesota and St. Louis two weeks ago.

The Rangers have won the past eight meetings against the Devils, including seven by at least two goals. They claimed a 3-1 victory March 4 in New York when Filip Chytil scored the tiebreaking goal in the second period and Kreider tallied in the third.

Chris Drury spoke about the state of the team after making his deadline day trades and provided an update on Kaapo Kakko and Kevin Rooney.

Both players will be out for the remained of March and possibly into April per the GM.

Kakko, 21, last played on January 21 against the Carolina Hurricanes. Television cameras caught Kakko wincing in a lot of pain and discomfort at the end of the second period as he was flexing his his left arm. He was placed on IR the next day.

Rooney, 28, has 11 points in 51 games this season and has been an integral part of the Blueshirts’ physical fourth line with Ryan Reaves. The injury occurred on March 2 and the Rangersmiss his checking abilities.

As for his biggest acquisition, Andrew Copp could very well play all three forward position on any line.

“Versatility’s a great thing to have in your lineup. He’s certainly an exciting piece to have in a Rangers uniform,” Drury said.

Tyler Motte was described as competitive player for the team’s bottom six that can kill penalties. Justin Braun is a defensive rearguard who gives them depth on the right side.

Nick Merkley is an AHL acquisition to help take the place of now departed Morgan Barron, who was dealt in the Copp trade. 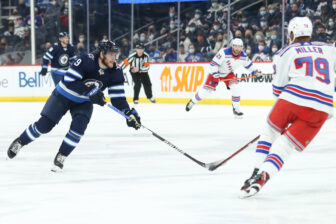 New Jersey’s next three games are against playoff contenders, as it visits the Toronto Maple Leafs and Washington Capitals after facing the Rangers. The Devils are returning home after an unsuccessful Western Canada trip that saw them endure three straight 6-3 losses to the Vancouver Canucks, Calgary Flames and Edmonton Oilers and wind up with several players battling bouts of stomach flu.

Unlike the visits to Vancouver and Calgary, the Devils held a lead on Saturday in Edmonton. Jesper Bratt scored twice and Nico Hischier gave New Jersey a 3-2 lead 3:14 into the third, but the Devils allowed three goals in a span of 3:48 en route to their 18th loss by at least three goals this season.

“It’s frustrating, but if you look at the whole game, I think we did a couple of things pretty well,” Hischier said. “I wouldn’t say it’s a terrible game, but it’s just frustrating at the end coming out of here short.”

The Devils allowed 18 of their 40 shots on goal in the third period to slip to 1-4-0 in their past five games.

Recap all the NHL Trades and Signings from NHL Trade Deadline Day Here.