The New York Rangers are apparently still holding out hope that something can be done to bring back Andrew Copp. As free agency is set to open on Wednesday, July 13 the window to get a deal done is quickly closing.

Copp, 28, was the team’s top trade deadline acquisition. He posted 53 points in 72 games with 18 of those coming with the Blueshirts. In the playoffs, Copp added 6 goals and 14 points in 20 contests.

According to Arthur Staple of The Athlethic (subscription required), sources indicate that Chris Drury continues to work on the situation. It should also be noted that all signs point to Ryan Strome’s time in New York as done.

Per CapFriendly, the Rangers currently have around $10.2 million in cap space. After making some adjustments, such as placing Vitali Kravtsov and Zac Jones in the lineup that number becomes $9.2 million.

If you set aside $2 million for Kaapo Kakko’s next deal and $1.5 million for a new back up goalie the Rangers have around $5.7 million for a second line center. They would also need to sign two more forwards.

Ergo why this is such a big problem. The Rangers simply need more cap space.

Drury tried to move Patrik Nemeth along with a pick at the draft to get someone to eat his two years remaining at $2.5 million but were unable to do so.

Nemeth is expected to be placed on waivers for a buyout before July 12. That will only add back $1.5 million to the cap this season but every little bit helps. That’s why I’ve heard rumblings that the Rangers may be forced to move Ryan Reaves and his $1.75 million cap hit.

Copp just completed a 1-year deal signed with the Winnipeg Jets for $3.6M. According to Jeff Marek on HNIC, Copp is looking for a new contract with a minimum $5.5M AAV. While that makes things tight for the Rangers they could make it work.

Another issue for the Rangers is term. Copp is unlikely to accept anything less than 5 years on his next deal which is problematic for next season and beyond. The Rangers may be forced to deal a young player in order to extend both Alexis Lafreniere and K’Andre Miller next summer.

Multiple reports indicate that Patrick Kane and his agent will be speaking with Blackhawks management soon about his future. That was expected to happen as soon as the Hawks traded away both Alex DeBrincat and Kirby Dach at the draft.

Kane, 33, has one year left on a deal that hits the cap at $10.5 million. He registered 92 points in 76 games last season and would return a haul of picks and prospects if he’s willing to waive his full no-move clause. The Blackhawks would also need to retain 50% of that cap hit.

Larry Brooks of the NY Post recently wrote a column that practically lobbies the New York Rangers to trade for him.

The question I am posing is this: If Drury believes this team is close enough to winning a Cup in 2023 to pay big for a one-year rental, would it make more sense to go as far in as possible for Patrick Kane instead of J.T. Miller?

Honesty, Patrick Kane and the New York Rangers has been speculated a lot dating all the way back to the last trade deadline.

While Kane would pack a wallop with good friend and former linemate Artemi Panarin no matter who the center is, he’s still going to fetch a nice package.

If the Rangers want Kane at 50% it will cost them at least Kaapo Kakko, a first round pick, and probably one of their prospect defenseman. A hefty price indeed but realize Kane was going to return a nice package even if the Blackhawks opt not to retain a dime.

For now, Kane is fun to speculate about. This conversation will take on a whole new life and become very serious if he openly states he wants to be traded. 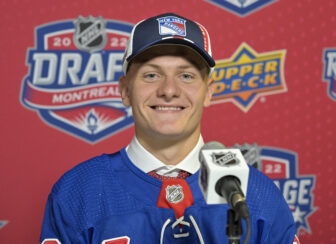