Things appear to be getting a lot harder for the New York Rangers as UFA forwards Andrew Copp, Frank Vatrano, and Ryan Strome will be hitting free agency when it opens on July 13.

According to Larry Brooks of the NY Post, sources indicate that they intend to test the market.

Ryan Strome and Andrew Copp both intend to hit the free agent open market on July 13, multiple sources have told The Post, thus creating an urgent need for the Rangers to acquire a second-line center… Winger Frank Vatrano is also expected to hit the open market.

This now brings to the forefront how will GM Chris Drury address the holes being left by their departure.

First, let’s breakdown what the Rangers could be losing come July 13.

Ryan Strome: The 28 year-old center had a solid season with the Rangers picking up 21 goals and 54 points in 74 regular-season games. In the postseason, he added another 9 points in 19 contests. Strome completed a 2-year deal he signed with the Blueshirts back in 2020 for $4.5M AAV.

Andrew Copp: The 27 year-old was the team’s top trade deadline acquisition. He posted 53 points in 72 games with 18 of those coming with the Blueshirts. In the playoffs, Copp added 6 goals and 14 points in 20 contests. He’s wrapping up a 1-year deal signed with the Winnipeg Jets for $3.6M. According to Jeff Marek on HNIC, Copp is in line for a new contract in the neighborhood of $5.5M AAV. That now appears to be on the low side.

Frank Vatrano: The speedy and gritty 27 year-old had instant chemistry playing with Chris Kreider and Mika Zibanejad scoring 8 goals in 22 regular-season games and adding 5 more in 20 playoff contests. Vatrano is a little on the small side but makes up for it with tenacity and a tremendous shot. He’s wrapping up a 3-year deal signed with the Florida Panthers for 2.53M AAV.

How will Rangers address these losses?

The Rangers may have already addressed the loss of Vatrano and Copp, at least from their standpoint as wingers. Vitali Kravtsov will be given a legitimate chance as the third-line right wing. I would also expect the Rangers to re-sign RFA Kaapo Kakko and shift Alexis Lafrenière to the first line right wing.

So the question is how best to close the 2C position hole and it will most likely come with a trade.

At this time, I do not believe the Rangers are comfortable moving Filip Chytil up as the full-time second line center. That also makes him a prime candidate to be moved in a deal for one.

According to Arthur Staple of the Athletic, he’s the player that teams are asking about in a trade.

When it comes to potential targets, it has to be a player that fits in the cap and also the plan. That means a center with two years or less of term with a cap hit in the neighborhood of $6M AAV.

The Rangers are going to be feeling the cap crunch for the next two seasons, especially with Lafrenière and K’Andre Miller up for new deals in 2023.

In the summer of 2024, both Jacob Trouba ($8M AAV) and Chris Kreider ($6.5M AAV) can be traded as their full no-move clauses become modified. This will open up a wide-range of possibilities for the roster.

I’ve already written about Mark Scheifele here as the top option for a trade. However, as have been pointed out by others Dylan Larkin of the Red Wings (1-year, $6.1M) and Vancouver Canucks’ Bo Horvat (1-year, $5.5M) might make sense at the right price.

While Pierre-Luc Dubois and J.T. Miller sound great, the ask of three pieces is way too much for a player that will likely be gone in a year or two. The Rangers can’t afford to give up more than Chytil and a first-round pick in 2023 for a potentially short-term second line center.

One last note, Chris Drury has been very shrewd with his dealings and all these rumors of potential trades for a second line center can be used as unspoken leverage in negotiations with their own UFAs. 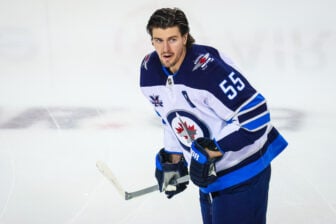