What do the New York Rangers have to do in order to get the respect they deserve? The latest Stanley Cup odds have come out and the Blueshirts are tied for the 9th along with the Pittsburgh Penguins?

I’m not sure the Penguins are over Jacob Trouba’s flying elbow off the top of the steel cage yet, but aren’t they the same team that may lose Evgeni Malkin and Kris Letang to free agency?

Regardless, it’s hard for me to reconcile how the Rangers are behind teams like the Carolina Hurricanes, Vegas Golden Knights, Edmonton Oilers, and Minnesota Wild.

Here is the full list of Stanley Cup odds via BetMGM:

Rangers should have better odds

Listen, I am not an oddsmaker and do not understand the formula for how they determine them. The research turns up that computer algorithms are used that take into account a myriad of things including subjective power rankings.

Let’s say for a second that the Rangers are not in the top five because they have some questions about their lineup such as who will be their second line center next season. Outside of that, the Blueshirts should be bringing back a large portion of the same team that went to the Eastern Conference Final with Igor Shesterkin in goal.

How is it that a team like the Carolina Hurricanes, who lack offensive depth and have their own free agent concerns be ranked fifth? Do oddsmakers know who is replacing Vincent Trocheck?

What about the Vegas Golden Knights? A team that has cap issues and goalie with a long history of injury in Robin Lehner. Or the Edmonton Oilers, who don’t have a goalie worth discussing right now?

And just how is it that the Minnesota Wild, a team that practically gave away Kevin Fiala because they’re in cap hell get better odds?

Bottom line, the New York Rangers deserve to be higher. A lot higher. 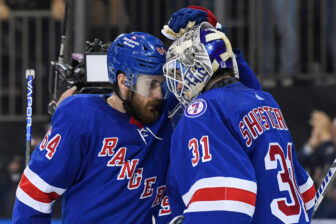