You better be ready for it because the New York Rangers rumors buzz is only going to get louder as we approach free agency on July 13.

There’s plenty of outstanding questions regarding all their pending free agents which include the following:

Chris Drury has limited cap space ($10.5M) to work with this summer so many of these players won’t return. He can also try to trade or buyout defenseman Patrik Nemeth. That won’t do much, but every little bit helps. A trade without salary retention is worth $2.5M and a buyout gets them $1.5M this offseason.

With that housekeeping done, let’s dive into the latest trade rumors.

According to NY Post’s Mollie Walker, the Rangers are very likely to re-sign Tyler Motte.

Drury spoke glowingly of the 27 year-old during the playoffs and it became evident at that time he was high on the priority list to keep.

“Free agency is still a bit a ways,” Motte said after the season. “I can’t speak on who’s interested but it will be interesting to see how it goes. I enjoyed being here, that’s for sure.”

This is also an opportunity for Motte to cash in off a solid season posting 15 points in 58 games with 2 playoff goals, so nothing is set in stone.

Motte was making just $1.225M on his last contract. You can expect a decent increase on a multi-year deal. My best guess is something in the neighborhood of $2M per season on a 3-year contract.

There’s growing concern that both Andrew Copp and Ryan Strome will be looking to test the UFA market, which would open up a gaping hole at the second line center position. With Strome being more open to staying on a team he loves, it’s believed that Drury has shifted focus back to him.

Of course, due diligence is taking place on the trade market.

On Wednesday, RDS’ Francois Gagnon reported that the Rangers spoke with the Winnipeg Jets about Pierre-Luc Dubois. The 24 year-old pending RFA is now a top trade bait candidate after he informed the Jets he wants to become a UFA in 2024.

Forever Blueshirts learned that Dubois and Canucks forward J.T. Miller are both on the Rangers radar this summer. Both players have been of interest at various times in the past two seasons.

Miller, 29, has 1 year left at $5.25M and is very likely heading to UFA status next summer. There is also a question if he is the right type of center for Artemi Panarin. He’s also played wing for a good portion of his career.

While Miller fits cap-wise for this season, the cost to acquire him for just one year makes little sense. Unless that price comes down, which was believed to be three pieces, Drury should steer clear.

As for Dubois, he has familiarity with Panarin and has longterm promise. From what I could gather, the trade price would include at least two young players/prospects and a first round pick.

To make things more difficult, locking him up for 7 years will cost Drury around $8M AAV. The really Rangers don’t have that money to give right now. Especially when you consider that Alexis Lafreniere, K’Andre Miller, and Filip Chytil all need new deals next summer.

Even if Chytil is part of the package, it’s still precarious to sign Dubois for more than two-years. There’s a gamble Drury can take and that’s to bridge him at around $6M AAV until 2024, that’s when Chris Kreider and Jacob Trouba’s full no-move clauses become modified. They take up $14.5M in cap space combined.

So would you risk trading Kakko, Nils Lundkvist, and your 2023 1st rd pick for a player that may bolt for his hometown Montreal as a UFA in in 2024? That’s where it’s rumored he eventually wants to play. These are all things Drury must consider in a Dubois trade.

Of course, the Rangers can try to trade for another Jets center in Mark Scheifele. He’s affordable with a $6.125M cap hit for two more years and would be perfect. 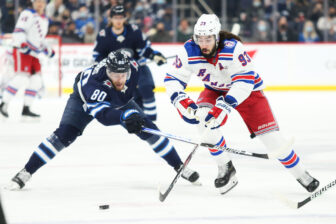