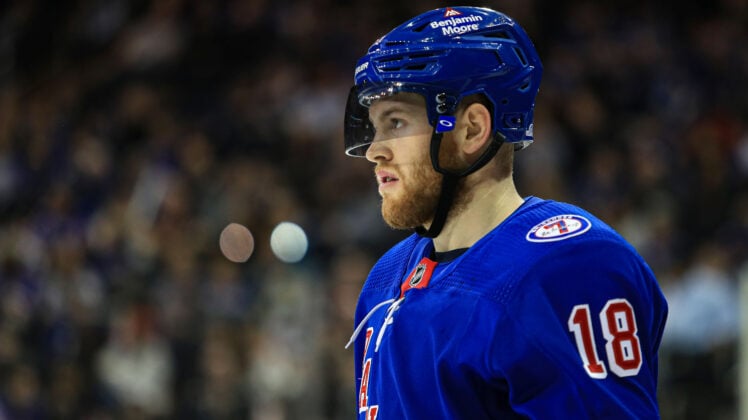 According to CapFriendly, Drury currently has around $13.5M in space. The Rangers have 8F, 5D, 1G under contract. They also have cost controlled players like Zac Jones they could move up to the big club if they so choose.

New York is expected to either trade or buyout Patrik Nemeth, who has two years remaining at $2.5M AAV. That will help the cap situation but clearly not enough to retain all key free agents.

Ryan Strome: The 28 year-old center had a solid season with the Rangers picking up 21 goals and 54 points in 74 regular-season games. In the postseason, he added another 9 points in 19 contests.

“My first choice is to still be a New York Ranger,” he said on Monday. “I think I’ve given them the indication that’s my feeling. If that’s not the case then we will cross that bridge when we get to it.”

Strome completed a 2-year deal he signed with the Blueshirts back in 2020 for $4.5M AAV.

This will ultimately boil down to if they can re-sign Andrew Copp. Chris Drury covets size and versatility. If Filip Chytil is ready to become a second line center, then Copp shifts to the right wing. If not, he’s stays in the middle. However, if Copp wants max money and term, Strome is more likely to take a discount to stay that fits the cap situation which is at $6M or less.

Andrew Copp: The 27 year-old was the team’s top trade deadline acquisition. He posted 53 points in 72 games with 18 of those coming with the Blueshirts. In the playoffs, Copp added 6 goals and 14 points in 20 contests.

“My first thoughts are how I can get better as a player,” he said on breakup day. “Over the next couple of weeks I’ll evaluate. Basically hear from [Gallant] and [Drury] where they see me longterm. Not just next year but hopefully four or five years. A lot to take in to make the best decision.”

Copp is wrapping up a 1-year deal signed with the Winnipeg Jets for $3.6M. According to Jeff Marek on HNIC, Copp is in line for a new contract in the neighborhood of $5.5M AAV. If Chris Drury is willing to go five years, I believe the deal gets done. If Copp feels he wants to test the market, the Rangers go back to Strome.

“I think I have some unfinished business here,” Vatrano said. “I want to help this team win a Stanley Cup. Everything here is world class and it’s great to be a part of.”

Vatrano is a little on the small side but makes up for it with tenacity and a tremendous shot. He’s wrapping up a 3-year deal signed with the Florida Panthers for 2.53M AAV. I would assume that he’d at least want a two or three year deal for around $3M to $3.5M. That’s cap space they could use to sign Kakko. Plus the Rangers have inked Vitali Kravtsov for another year which overloads the right side.

Tyler Motte: Chris Drury spoke glowingly of the 27 year-old during the playoffs and appears high on the priority list to re-sign. This is also an opportunity for Motte to cash in off a solid season posting 15 points in 58 games with 2 playoff goals.

“Free agency is still a bit a ways,” Motte said. “I can’t speak on who’s interested but it will be interesting to see how it goes. I enjoyed being here, that’s for sure.”

Motte is coming off a 2-year deal signed with the Vancouver Canucks for a bargain $1.225M AAV. He is very likely looking at a deal closer $2M on his next contract. As long as it’s within reason, Drury will keep him to center the fourth line and PK.

Rounding out the remaining Rangers UFAs

Kevin Rooney: The 29 year-old forward can play center (which is key) and is a good penalty killer. He has done a solid job here with the Rangers but is likely gone due to cap constraints.

“I love this City and I love this group,” Rooney said. “If there’s an opportunity to come back, I’ll definitely be excited about it”

He’s affordable for sure after completing a 2-year deal worth just $750K AAV. I would expect him to want well over that. If for any reason they can’t re-sign Motte, Drury will sign Rooney instead. Remember, they did protect him in the expansion draft.

Justin Braun: Once Gallant realized that Nemeth was a liability, the veteran defender brought in at the deadline did a great job. He and Braden Schneider were a rock-solid third pairing during the postseason.

With young Zac Jones waiting for his opportunity, I believe the Rangers move on from Braun. The 35 year-old prefers to play RD and the Rangers have way too many of those. He made $1.8M AAV on his last deal and isn’t likely to take less.

Greg McKegg: Seldom used forward Greg McKegg has been a nice player to plug into the line up but with Dryden Hunt still under contract he’s not a necessity.

Keith Kinkaid: An excellent backup goalie that has been solid for the Rangers for emergency situations.

The Rangers would likely want to see another goalie step up to be the starter for the Wolf Pack, but Kinkaid is a proven commodity at a good price. He made $825K on his last deal. 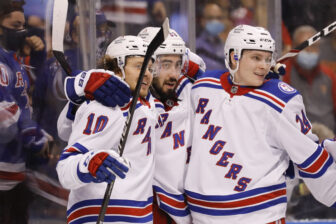