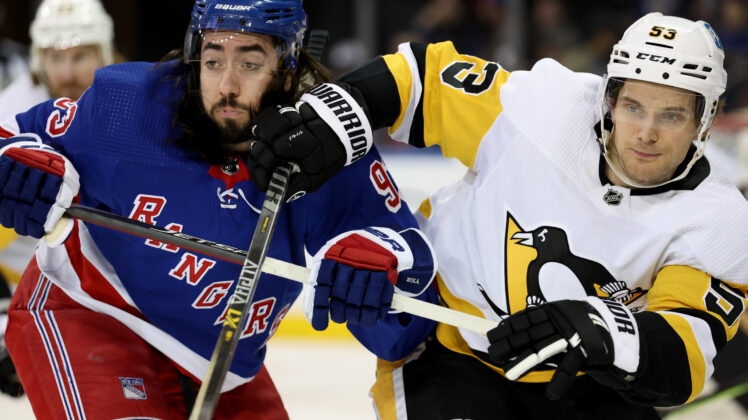 As rematches go, the one Tuesday night when the New York Rangers visit the Pittsburgh Penguins will carry about as much drama as the regular season can offer.

Not only do the Penguins sit one point ahead of the Rangers in a battle for second place in the Metropolitan Division, the teams also are coming off a game Friday in New York in which Pittsburgh essentially was a no-show.

The Penguins fumed after their 5-1 loss, calling themselves out for not being competitive.

Their response was an 11-2 romp Sunday over the overmatched Detroit Red Wings.

“I think any game, like (Sunday’s) or the one the other night, whether it’s super great or super ugly, we’ve got to take our lessons from all of it, from the good and the bad,” said Pittsburgh winger Bryan Rust, who had a goal and two assists against the Wings. “I think the more we can (heed) those lessons and move forward toward the next one, that’s what makes good teams good.

“And we’ve got to do that again coming up on Tuesday.”

The Penguins’ rout Sunday was complete one. They were 3 of 6 on the power play, had a shorthanded goal, got at least one point from all 12 forwards (16 players total), and made good on their chances with 11 goals on 35 shots.

It was much different from their effort Friday against New York, which had Pittsburgh coach Mike Sullivan barking that his team was “outplayed” and “outcoached” in all aspects, an uncharacteristic display of criticism of his team.

“Obviously, we weren’t happy with that performance,” Penguins winger Danton Heinen said. “We’ve got a lot of pride in that (locker) room, and we take it personally. Yeah, that was a good bounce-back game, but we’ve got them coming in on Tuesday, so that will be another big test. We’ve got to ramp up the intensity.”

Pittsburgh center Evgeni Malkin could make a difference in the rematch. He was a late scratch for Friday’s game because of a non-COVID illness, then returned Sunday in a big way with a hat trick plus an assist.

Rangers found a way against Sabres

The Rangers’ follow-up game Sunday wasn’t nearly as emphatic. They blew an early two-goal lead, after the newly acquired Frank Vatrano scored goals 18 seconds apart in the first period, and needed an overtime goal from K’Andre Miller for a 5-4 victory over the Buffalo Sabres.

“We played a pretty solid game, but we made some turnovers. We didn’t play as fast as we did (Friday) night,” New York coach Gerard Gallant said. “It was probably bad getting out to that 2-0 lead. We thought it was going to be easy again, and then you fall into that habit where we started turning pucks over again.”

The reference to the win over the Penguins being “easy” is one thing that sets up Tuesday’s rematch as one to watch.

“Every game from here on out is important for us,” Miller said. “We want to win every single one of them.”

Rangers forward Ryan Strome left Sunday’s game because of a lower-body injury, but Gallant said he “didn’t see anything serious.” Strome is listed as day-to-day.

If Ryan Strome is out for the rematch, it is very likely Andrew Copp, who was acquired at the trade deadline will get a chance to center Artemi Panarin.

“I’m a center that can play winger,” Copp said after the Sabres game. “But today I was a better at wing than I was at center. When you have something that’s working, don’t break that up.”

Copp, 27, has registered a point in every game he’s played so far since the trade on deadline day. In three games, he has 1 goal and 4 assists, for 5 points. He’s actually on a four-game point streak as he notched 3 assists in his last game with the Jets.

When it comes to goal scoring, keep an eye on Frank Vatrano.

The 28 year-old has four goals in 6 games with the Rangers since his acquisition. He’s played on all three of the top lines and looks like a nice fit with Chris Kreider and Mika Zibanejad.

“We got off to a great start,” Vatrano said via the team’s YouTube channel. “For us it’s just using our speed and keeping things simple. I think every game we’re getting better and we can build on this.”

The speedy winger plays with grit and is tenacious on the puck. Combined with Kreider and Zibanejad, who are both fast in their own right, it’s keeping the opposition on their heels in order to respect how quickly they can come at you.

“My whole career I’ve been up and down the lineup,” Vatrano said. “Even playing in the top six you can’t change your game.”

“The New York Rangers mourn the loss of Eugene Melnyk. Our thoughts are with Mr. Melnyk’s family and friends, as well as the entire Ottawa Senators organization during this difficult time,” said the Rangers in a tweet.

Read more on his passing here.